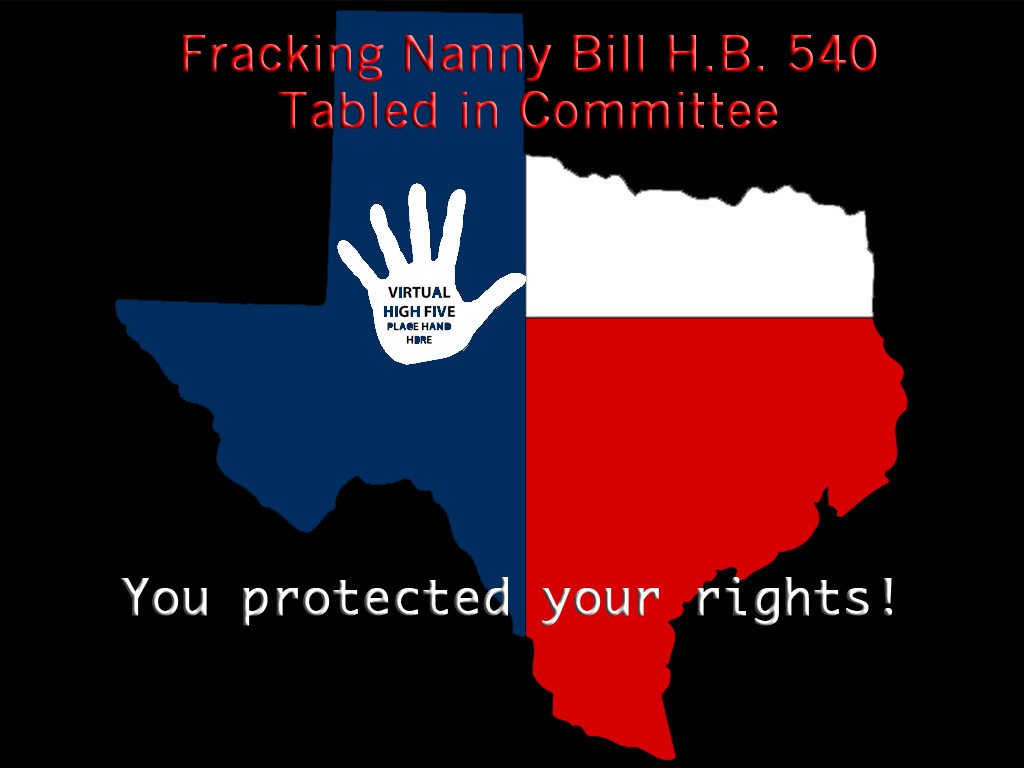 The State Affairs Committee tabled Phil King’s Fracking Nanny Bill, H.B. 540. Thank you to everyone who called, wrote and to the few who showed up to testify. The bill was tabled in committee. The committee did not appear to be impressed with this bill so I think it will die.

You can watch the hour-long hearing and testimony for this bill HERE. It starts at 45:45 where King explains the bill. He talks about California a lot. Mentioning CA is supposed to be really scary to Texas.

In CA the initiative and referendum has become a cottage industry. “You pay a group $100,00 and then they go and collect your signatures…these are widespread in California.”

Wait! That happened in Denton too! Only it was the oil and gas industry that paid a group misrepresent a petition and get signatures. I just happened to get them on video lying when they tried to get my signature. See: Caught on video: Petition circulators deceive Denton residents

That’s a decrease of 2,908 initiatives in just one year. When Rep. Turner questioned King about the number of initiatives in Texas, he admitted that there were only 41 over a 5-year period.

Here are some of the scary not-from-Texas initiatives King listed:

Local Control Texas has a list of the most frequent uses for initiatives.

He says several times that the initiative stopped all drilling in the City of Denton which is not true.

He mentions Earthworks as a scary boogie man.

In many of these cases you have national interests such as Earthworks, which is a national organization fighting climate change and fossil fuel issues, which is exceptionally prominent and you’ve got groups like that that are actually funding part of the litigation defense.

That’s when I scribbled on my prepared comments to respond to his comment. Frack Free Denton spent $70,000 on their campaign. The industry spent well over one million dollars. The industry has unlimited funds for a legal defense. Denton citizens have pro bono attorneys. Argument falls down.

He says cities are overstepping and going around city councils, which is the second time I scribbled on my prepared comments.

At last, King gets down to the real issue: It’s just too hard for the fracking industry when different cities have different regulations.

At about 1:08, Anita Burgess gives her testimony. She begins by telling the committee that she is a recent student of the initiative process.

I learned a lot about initiatives. A home rule city gets its power from the Texas Constitution. The city charter is the local constitution and it’s voted on by the citizens.

Denton’s charter does have some topics that have been withdrawn so would not be appropriate for an initiative but fracking is not one of those topics.

Then Burgess explains that as messy and inconvenient as democracy sometimes is, it’s still important.

Why is all of this important to this committee? The initiative is part of the constitutional power of the people. We believe it’s fundamental to our system of democracy and it’s an ultimate protection of our system of government. Is that convenient? Not always. But we don’t think democracy is always necessarily convenient. But we do believe it’s important to protect this very fundamental right.

Burgess said it should be up to the courts to decide if the issue is illegal and not the attorney general (AG). She said the executive branch, the AG, would be interfering with the legislative branch of a local government, which is improper.

And H.B. 540 would allow “prior restraint” where the AG can say a municipality may not hold an election, which is outside the AG’s powers. On the AG website it says the AG does not rule on what the law says but issues opinions with regard to the law.

Even our governor cannot veto a bill before it is enacted

This is one bill, hopefully, down with many other bad bills to go. Friday is the last day to file a bill so we hope to have a complete list on Sunday.

YOUR Texas government does not want YOU to participate in YOUR government.

Many of these bills will be heard in the Energy Resources Committee, which meets on Monday morning at around 10:30. But we don’t know what bills will be heard by the committee until Sunday evening. So you only have a few hours to prepare and get down to Austin. I know it’s hard. They make it hard so you won’t do it. But freedom isn’t free and all that… Well be there to help you every step of the way.