Is natural gas drilling and production making you sick? Here is what one woman did to get action when drilling near her home made her sick.

If you carefully document your health impacts, we can use the data to get better regulation.

Barnett Shale Health Impacts Case Studies: Sharon Wilson, Earthworks OGAP Organizer was flown to EPA headquarters in North Carolina to present four case studies of health impacts caused by natural gas extraction in the Barnett Shale. She met with the top rule makers in the Office of Air Quality Planning and Standards who are working on new rules for the oil and gas industry. Two months later she presented case studies to the EPA in DC.

For six years, Sharon has been documenting impacts in the Barnett Shale. The following are four case studies out of hundreds. 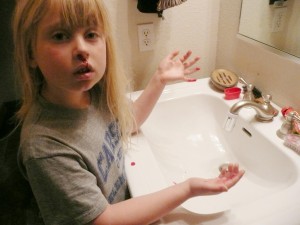 Deborah Rogers – Deborah lives in Fort Worth where industry claims the gas is dry so the emissions are less harmful.

Sandra DenBraber – Sandra also lives in a “dry gas” part of the Barnett Shale. Her home in Arlington is 600′ from UNT’s Carrizo facility. 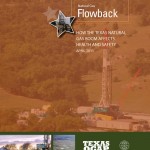 We have compiled and collected data on the serious health effects of gas drilling, hydraulic fracturing (e.g., fracking) and production on Texans throughout the Barnett Shale; water contamination and depletion; air pollution and other impacts.

We have also documented that the state’s present regulations, laws and enforcement policies are far too weak. Not only are the resources for dealing with the health and environmental impacts of gas production insufficient to meet the scale of the boom, but state regulators consistently downplay the risks, take sides with industry against landowners, and respond to complaints feebly, if at all. This report presents case studies of how this denial, complacency and bureaucratic inaction are disrupting the lives of families and communities.

According to Dr. Tom Kurt, a renown Medical Toxicologist who gave a presentation to about 30 people from all around the Barnett Shale, the following is medically recognized criteria for taking a proper history of chemical/toxic exposure.

To read more about Dr. Kurt’s presentation, visit the Argyle – Bartonville Communities Alliance and learn why it is important to Keep Track and Speak Up.

Some people keep track by writing things down on a calendar. It’s especially important to note any health effects during active drilling, fracking, flaring and venting processes. Some people use the TCEQ odor log.

From some readers about getting tested for exposure:

The panel my family was tested for was Inhalants Panel , Solvents and Gases. Many other panels can be ordered by your doctor.

Our blood was drawn in Lewisville it only took a few minutes. It was sent to NMS labs ( in Pennsylvania) through CPS labs (Clinical Pathology Services) This particular lab cost from NMS for this panel is about $100. (Could have a Dr. and blood draw fee as well) Insurance may cover some of it.

Because benzene disappears rapidly from the blood, measurements are only accurate for recent exposures.
In the body, benzene is converted to products called metabolites some of which can be measured in the urine.  Testing must be performed shortly after exposure.
Benzene Tests in Blood/Urine
–  complete blood count
–  Hydroquinone in urine
–  unmetabolized benzene in blood/urine
–  trans,trans-Muconic acid (ttMA) in urine
Benzene – High Exposure:
Urinary phenol

Studies and statements from medical and public health groups:

Here is a fact sheet for health care professionals on the dangers of exposing children to hydraulic fracturing and natural gas activity.

Here is a fact sheet for parents.

Study finds living near fracking is risky for health

Exposures and cancer incidence near oil fields in the Amazon basin of Ecuador: CONCLUSIONS The observed excess of cancer might be associated with the pollution of the environment by toxic contaminants coming from the oil production.

OCCUPATIONAL AND PUBLIC HEALTH ISSUES IN THE OIL AND GAS INDUSTRY

In Denton over 80 doctors signed a petition to the city council citing health concerns and asking them not to permit a drill site near the hospital, a city park and neighborhood.

But no one has voiced the concerns as succinctly as a doctor and father who lives in Southlake, when he stated:

“People think we figured out cigarettes cause cancer because we did a study and said, ‘Oh shit, this causes cancer!’ No, that’s not how we figured it out. Forty years later, when we saw all these people getting lung cancer, that’s when we got the information,” he says. “Do you want to be in the test group or the control group? I want to be in the control group that wasn’t exposed to elevated levels of benzene while gas drilling was going on near my house.

Fear and Fracking in Southlake