Even before Denton voted on the fracking ban, Representative Phil King, who is also chairman of ALEC, threatened to make local democracy illegal in Texas.

King was elected on the campaign promise that “Local control and limited government must be the first resort not the last.” When EPA issued rules to clean up Texas air, King called it an “attempt of the federal government to encroach on Texas’ sovereignty.” And King serves as the chairman of a committee to monitor actions by the federal government “including federal legislation and regulations that require or advise that states take certain actions.”

Question: Why would someone concerned with sovereignty and the overreach of big government on local control, file bills that take a big government action against local democracy?

Nearly $35,000 of King’s donations are from donors easily identified as having energy or oil-and-gas-related ties. King serves on the House Energy Resources Committee. Weatherford Democrat

So far, four bills have been filled this session that could take away a city’s right to pass rules to protect the public.

The bills to take away local control are an hysterical, knee-jerk reaction by paid industry protectors who are out-of-touch with people. When Denton residents voted to protect themselves, they got their chains jerked by the industry that soaks Texas politics in oily fracking money.  What these out-of-touch legislators don’t get is that Denton residents did not want to ban fracking. They wanted help from the city or the state to find a way to live with fracking. Had Phil King done his job on the House Energy Resources Committee, the fracking ban would never have happened.

King was quoted justifying his bills saying, “As other cities are looking at this…” There are no other Texas cities looking to ban fracking. I would know! They don’t have to ban fracking if they can enforce reasonable regulations. Texans are smart enough to know you don’t take an elephant gun to a mouse hunt. Only Denton had the unique permitting situation that allowed industry bullies to drill 200′ from their homes.

Many times Calvin Tillman and I met in Denton at 6:00 am and drove to Austin to testify before the Energy Resources Committee about bills. Each time Phil King voted for industry. Never once did he vote for a bill that would make fracking in our neighborhoods more bearable. The same can be said for Myra Crownover despite the stories of impacts I told about her constituents.

It just got harder to protect your personal property and your family’s health and safety. Oily fracking money has hijacked our government. Now we have to fight for the right to control what happens in our backyards on two fronts: local and state. On the local level we need stronger ordinances. On the state level, we have to fight back against these bills.

HB 539 Relating to the procedural requirements for the adoption of a municipal regulation, limitation, or prohibition on the production, storage, or transportation of oil or natural gas; authorizing a fee. This bill was authored by Phil King and sponsored by Charlie Geren,  Chris Paddie and Tracy O. King.

Requires cities to reimburse the state for lost revenue related to taxes, fees, royalties and other income that result from city drilling regulations.

The total cost would be determined by a legislative budget board using data from “any person, agency, organization or governmental unit” that the state finds reliable. Dallas Business Journal

The Texas Municipal League says this bill goes too far and that “It’s effectively a way to end all regulation of oil and gas.” Cities would be required to pay lost royalties, taxes and fees to the state. How these lost royalties would be determined is a mystery.

HB 540 Relating to the submission to the attorney general of a measure proposing the enactment or repeal of a municipal ordinance. This bill was authored by Phil King and sponsored by Ryan Guillen, Tony Dale, and Tracy O. King.

This bill takes away the people’s right to petition for initiatives and referendums unless the attorney grants permission. That means any initiative or referendum for anything.

SB 343 Relating to the conformity of local law with state law. All these bills are ridiculous. But this bill is uber ridiculous. It’s probably not even constitutional. It means a city cannot pass any ordinance that “conflicts with or is more stringent than a state statute.” Think about that your city’s noise ordinance.  This bill was authored by Don Huffines who is so new he Texas Legislature page is not updated yet. I got him a hat. I didn’t find any sponsors but if any step up, they have have hats too. Huffines’ district is in Irving. If you live in Irving and this bill passes, say goodbye to your restriction to injection wells. Say hello to more earthquakes. If I lived in Irving, I would make an appointment to speak with him.

SB 440 Relating to the authority of a county or municipality to prohibit hydraulic fracturing treatment.
This is a simple bill. Unlike it’s grandiose neighbor bills. It was written by Konni Burton. I didn’t see any sponsors.

“A city cannot infringe on personal property rights,” Burton said. “This is pretty black and white to me. …. A governmental entity should not be able to tell you what you can or can’t do with your property.” Star-Telegram

A home and yard is personal property. The rights of home owners to protect their property and the health and safety of their families cannot continue to be ignored. Are home owners just squatters in Burton’s view? Update: And another thing: A city did not ban fracking in Denton. VOTERS banned fracking using the democratic process.

UPDATE: It’s worse than we thought.

HB 1556 Relating to prohibition of certain regulations by a county, municipality, or other political subdivision.

SB 710 Relating to the authority of a political subdivision to prohibit hydraulic fracturing.

HB 40 Relating to the express preemption of regulation of oil and gas operations and the exclusive jurisdiction of those operations by the state.

HB 2855 Relating to the authority of a political subdivision to prohibit an activity over which the Railroad Commission of Texas has jurisdiction.

DO SOMETHING ABOUT IT!

These elected officials go home every weekend. You can generally make an appointment to meet with them on Friday or Saturday. If you care about your property values, serenity and your family’s health and safety, I suggest you pay them a visit. 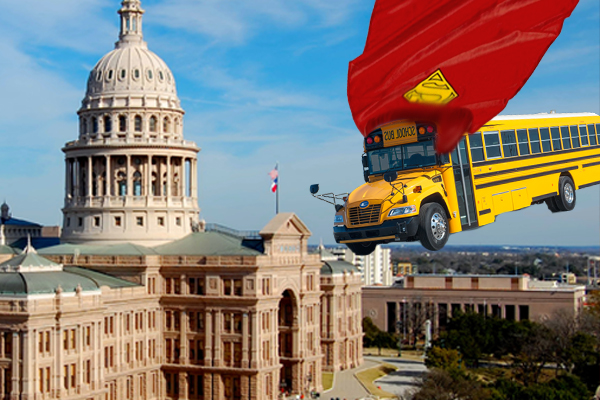 Join us on March 2nd. If you live in the DFW area, get on the bus. If you live outside the area, meet us in Austin.

More effective than a speeding email, more powerful than a phone call, it’s FACE-to-FACE meetings with your elected officials!

Get on board! This March 2nd, we will be traveling to our state capital in Austin to tell our representatives to uphold our right to local control. There are 4 bills already proposed in this legislative session that if passed, will strip municipalities of their home rule rights. These could not only affect bans on fracking, but cities across Texas would have their local powers limited or taken by the state. Let’s go tell Austin we don’t want big government taking away our right to determine what is best for our communities’ health and safety.

Tickets and links to forms: HERE

Fort Worth Pick Up Location: Wal-Mart in Forth Worth at 717 West Berry Street. (We will stop in Fort Worth at 7:30 am to pick up riders from other areas.)