(this page is a work progress, please check back often)

Why should I read Bluedaze?

Reading Bluedaze has been found to increase IQs by 10-20 points. Don’t you feel smarter already?

I wanted to be a Barnett Shale Millionaire. After doing my research on drilling and fracking, horrors unfolded. I started noticing what was happening all around me and writing about it. I took pictures and video.

Eventually the people whose water wells are now poisoned, the ones who are sick and dying as a result and the near impossibility of holding those responsible accountable found me. So did the surface owners whose land is severely damaged, poisoned or left unusable and who are powerless against the deep pockets of oil and gas. They started asking me to tell their stories.

The biggest horror of all is the reckless use of water that is polluted and permanently removed from our hydrologic water cycle. This practice is not sustainable and must be stopped immediately! (Rethinking, it’s impossible to say what the biggest horror is.)

I started this website to do my part to make a difference.

Are  you a mineral owner?

As natural gas is produced from the Barnett Shale, will there be subsidence on the surface? Will sinkholes form or my foundation crack?

Subsidence can occur when hydrocarbons are produced or when large 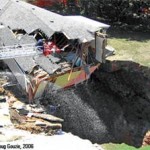 volumes of groundwater are removed. No one knows for sure how much water industry is removing from our aquifers but we are learning more about it every day and it’s a lot more than what industry tells us.

For more information see the posts in the subsidence category. And while you’re at it, look up sinkholes. That’s where the ground opens up and you fall in. =) Pleasant dreams.

Update: It’s already happened. There’s a sinkhole in Fort Worth.

High-volume hydraulic fracturing of horizontal wells is a very new technology that was developed in the Barnett Shale in the late 1990’s. (They were contaminating water with this practice even way back then.) According to Congressional testimony, the two technologies, horizontal drilling and hydraulic fracturing, were “married” in 2002. So it is still in the experimental stages. Does that make you feel like this little guy? 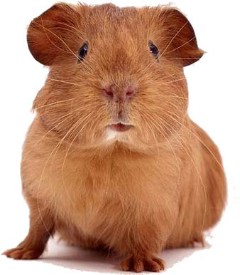 What percentage of land in the defined drill area has to be under lease before drilling can begin?

Why don’t trucks that carry drilling waste that has been used in drilling have “TOXIC” signs on them to warn people if there is an accident?

The oil and gas industry has loopholes in our environmental laws so they don’t have to call drilling waste toxic even though it is potentially toxic. The looph.ole that allows this is in the Resource Conservation and Recovery Act – RCRA.

My wife is concerned about potential contamination of our 800 foot deep well. Who will oversee the safe drilling of the well which assures no spilling effects to the water at that level?

The industry is largely self regulated.

How do I know if the drilling company will not drill under our property if we are not put in forced pooling?

HERE You can see an annotated video of a fracking operation near where I used to live in Wise County, Texas.

What chemicals are used in fracking fluid?

Do airborne toxins from natural gas drilling cause illness?

They are drilling close to water well, how can I be sure my 850 foot water well won’t get contaminated?

I’ve heard horizontal drilling is a new technology? Is this true?

Does natural gas drilling and fracking cause sinkholes?

How do I know if they are drilling under my property?

What is green completion?

That is a myth.

How do I know the drilling companies aren’t cheating me out of my money on the lease I signed?

I can almost guarantee you they are. You can have your check stubs audited.

If natural gas drilling and fracking is so unsafe why doesn’t the government declare a moratorium until the rules are changed?

Where can I move that isn’t on a shale?

They are drilling by me and my kid is sick, could the two be related?