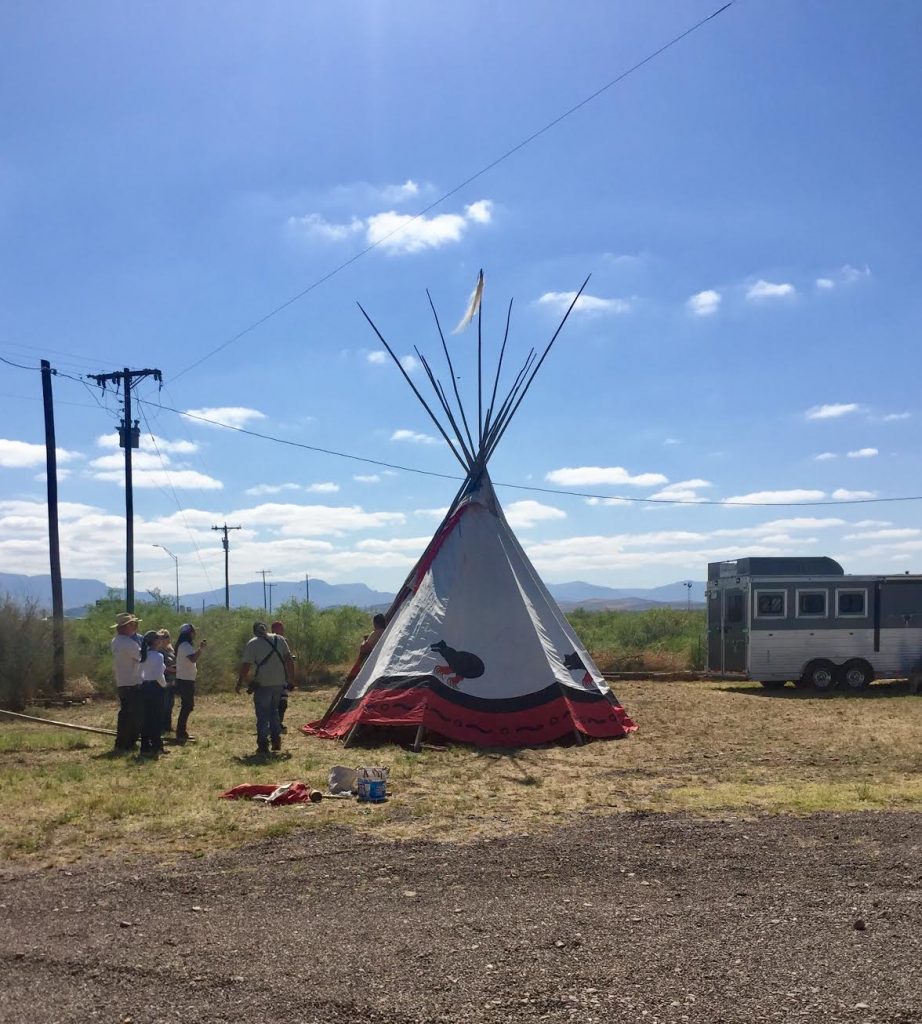 Today in Toyahvale near Balmorhea, Texas at the inaugural Earth Day celebration I demonstrated solar oven cooking by making smores in my solar oven, I learned how to put up a teepee and I learned just how far Apache Corp. harassment and intimidation will extend to anyone who opposes fracking in Balmorhea.

I met Chancellor Alex Glover-Herzog when Molly Dunton, Earthworks’ Community Empowerment Project coordinator, and I were in Balmorhea in March. Chance has a drone and was showing us some pictures he took that day. I don’t really know him but he seems intense, which is certainly not a trait with which I can find fault.

Friday, the Reeves County Sheriff came to Camp Toyahvale and arrested Chance for operating an unmanned aircraft over critical infrastructure (or something like that).

How far will Apache Corp. go?

I will try to piece together what happened to lead up to this arrest and the difficulties in getting him released on bail. It is complicated so please bear with me and, If I get something wrong or a little off, let me know.

Chance and George were given warnings with the charge of criminal trespass, which is an incorrect charge according to Texas Statute because neither were carrying any weapons. Trespass in Texas can get you shot but it’s only a misdemeanor.

April 21, Chance was arrested at Camp Toyahvale and taken to the Reeves County jail.

Much of the Toyahvale/Balmorhea inaugural Earth Day celebration was spent trying to figure out how to get Chance out of the Reeves County Jail. Each time bail amount and charges were calculated and the jailer person agreed that he could be released, mysteriously another charge was levied against Chance. This went on all day long until, finally, at about 7:00 pm we learned how far Apache Corp. harassment and intimidation will go toward anyone who opposes fracking Balmorhea…

This is the same Apache Corp. that said this:

But Apache is saying all the right things. They promise not to drill on or under the town of Balmorhea or Balmorhea State Park. To slake the almighty thirst of all those wells, they vow to truck in brackish, non-potable water and to recycle as much of it as possible, the better to minimize harm on the oasis’s precious water table. yThey say the play is in its earliest stages, and that they want to engage in a dialogue with Reeves County every step of the way. Texas Monthly

In total, Chance has 4 charges of operating an unmanned aircraft over critical infrastructure (or something like that). All the charges were filed by Apache and all but one–the warning given at the Weismiess lease–were on dates and times that Chance says he can prove he was not in the area. Apache is working overtime to make sure no one can see their dirty doings.

Chance was still in jail when I left for Fort Davis were I’m staying tonight.

The amazing thing that happened from all of this: Per the Reeves County Sheriff Granado, Reeves County Deputies will no longer be allowed to contract with the oil and gas industry as their security guards. It’s a conflict of interest. At least some integrity is still alive in small town Texas.

It’s midnight. I’m tired. I also filmed some amazing pollution events today. I can’t wait to show you the one  at an Apache facility that looks like Armegeddon.