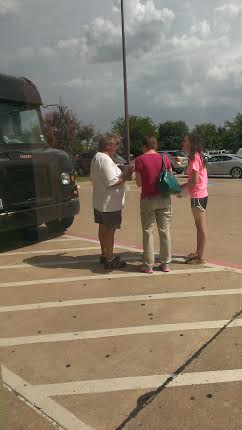 The fracking industry is waging a “shock and awe” attack on residents of Denton, Texas. After a decade of being bullied by an industry that refuses to follow any rules, residents are saying, “We’ve had enough” and seek to ban fracking in the city limits. The ban initiative goes before the city council on Tuesday where they can either adopt it as an ordinance or include it on the November ballot.

The City Council meeting will begin at 6:30 p.m. in the Council Chambers at City Hall, 215 E. McKinney St.

The industry has showered Texans, even those who don’t live in Denton or have mineral holdings there, with more misleading propaganda than I can count. See: Scam Alert… for a post with updated examples of letters sent to mineral owners. Today, Breitling Energy has a full page color ad in the Denton Record Chronicle. Breitling CEO, Chris Faulkner, who lives in Irving nowhere near fracking, recently invited Denton residents to “…fall on their swords for fracking.”

Texas Railroad Commissioner, Barry Smitherman, suggests in a letter that could be an audition for a job with The Onion, that Russia is financing the Denton ban effort. We know Smitherman is looking for a job. Texas voters recognized him for the utter failure he is and rejected his bid for promotion to Texas Attorney General. Since I am the one and only person involved in the 100% grassroots effort in Denton who works for an environmental organization, Smitherman must be pointing the finger at me. I have receive no money from Russia but, if I do, the vodka is on me. NOTE: See Denton Councilman Roden’s response to Smitherman.

Last week, and oil lobbyist for the American Petroleum Institute even claimed democracy is irresponsible.

Oil lobby VP: ‘Irresponsible’ to deal with fracking at ballot box
The Hill, 7/10/14

Rather than admit the horrible impacts residents face from fracking and investing in improvements that might decrease opposition, the industry would rather recycle the same old psyops techniques that have failed.

All this propaganda and rhetoric is designed to have masses of industry friendly people show up at the council meeting and overwhelm Denton residents. Few of these people will carry voter registration cards that allow them to vote in Denton.

Undoubtedly, the craziest attack of all are the “paid protesters” who are lying to residents to get their signature on a petition of dubious origin.

The woman told Swann she was being paid $2 for each signature. The name of the company on her paycheck was “Denton Taxpayers for a Strong Economy.”

No entity with that name is registered with the Texas Ethics Commission. The only entities that have filed campaign finance paperwork with the Denton city secretary are “Pass the Ban,” which supports the frack ban, and “Denton First,” which supports a recently filed petition to change the liquor laws.

Saturday, while enjoying the Denton Community Market, I spied a couple of the petition circulators and was able to get one of them lying to me on video. Notice that he starts off by implying his petition will  “put some kind of bans” on fracking. Then he claims their “regulations” would keep fracking “outside city limits” which is exactly what the FrackFreeDenton petition is about. This guy clearly doesn’t know anything about fracking or Denton but he does know he needs my signature on that page to get paid. He has a strong finish by suggesting the “Unconstitutional Takings” mentioned in the petition is to prevent the City of Denton from using eminent domain to forcibly take people’s homes for fracking, something the city has NEVER done.

This man was not as skilled at lying as the man Cathy McMullen encountered. Here is her first person account and a picture she took

This man approached me outside the Mary Horn tax assessor office and asked me to sign a petition to regulate fracking in Denton. He stated there is currently no fracking allowed in Denton but the city council was going to vote to allow it during their 7/15 meeting. He states since the city was going to start allowing fracking and I needed to sign petition to make the city regulate it.

The man stated he was from Colorado because I had a shirt on from Telluride. When I asked him why he was circulating a petition in Denton he said because he was getting paid.

The man stated I did not need to be a registered voter but need to live in Denton. When I told him I was not comfortable signing the petition he walked away and approached 2 women who signed the petition thinking it was for a ban on fracking in Denton.

If you signed this petition and feel it was misrepresented to you, please contact the City Council members:

Investigations by the Denton Record Chronicle have turned up addition information about the petition origins and the substantial pay raise recently given to the circulators. See:

Some well-meaning people still do not understand the situation in Denton. Regulating fracking is not an option because of the way the permitting was done prior the 2011. The permits were issued by plats that could include several hundred acres. These platted areas are not subject to any of the city’s new ordinances.

See a copy of the bogus petition HERE.