Fracking, it’s a lot to swallow.

This is a Big Gulp fracking post and it may be a lot to swallow for some of the new communities where residents are just beginning to try to get their arms around the complexities of fracking’s impacts and how to deal with the reality of those versus the slick television ads portraying fracking as the answer to all our problems. This is not the Super Big Gulp or even the Mega Big Gulp fracking post. There is so much more to the picture.

The “marriage” of two old technologies, horizontal drilling and hydraulic fracturing, has fueled a new, national drilling boom. But these newlywed technologies, sometimes called unconventional drilling, remain experimental. We lack sufficient science to know how to extract shale oil and gas safely while adequately protecting public health and the environment and minimizing climate impacts. What we do know is that human health, property and well-being and the environment, and the global climate are suffering because of fracking.

Complaints are widespread and have risen in tandem with a veritable gold rush of new natural gas wells – now numbering over 493,000 across 31 states. Fracking is also fueling opposition–even in Texas, a state known for supporting the oil and gas industry–that grows in direct proportion to drilling expansion.

People all across Texas are asking about the boom.

“The whole house shook and it looked like it was going up and down and there was a sonic boom at the same time,” Alley Koteras told KTBS 3 about a 2012 quake in the East Texas town of Timpson.

“I heard this loud noise and I thought it was a truck hitting the back of our house,” Pat Jones, from the West Texas community of Snyder, told television station KCBD about an earthquake there in 2010.

“I heard what appeared to be a boom or a loud noise, and just as soon as I heard the noise, then the house shook,” Jerry McVey, of Euless told the Associated Press about an earthquake that struck his community northeast of Fort Worth in 2009.
StateImpact, February 3, 2014
Why Texans Are Hearing a ‘Loud Boom’ During Earthquakes

This boom has also been reported by residents in Denton and Grand Prairie.

We’ve known for decades that injection can induce earthquakes. Earthquakes induced by fracking and associated injection are called “frackquakes.” Frackquakes are following the fracking boom expansion–started in the Barnett Shale–as it spreads across Texas, other states and even worldwide.

My presentation given at the “Shake the Ground in Austin” people’s meeting in Azle, has up to date information about frackquakes.

An SMU study of the frackquake swarm in the Reno/Azle area will be completed in late April for presentation at a May conference in Alaska. Then the study will undergo peer-review which won’t be complete for a year or so. In the meantime, Texas has taken no steps to reduce the injection in that area or even admited that fracking and associated injection could be a cause.

No good answers for dealing with the waste.

Unconventional fracking produces massive amounts of solid and liquid waste that has to be dealt with.

“What’s different is the volume of fracking fluids and the volume of flow-back that occurs in these wells. It is 50 to 100 times more than what was used in the conventional wells.”
~Louis Allstadt, former Mobil V.P.

Let’s pump it in the ground.

This waste is toxic, can be laced with heavy metals, potentially radioactive and extremely salty. The cheapest way to deal with it is deep injection wells. But injection can cause earthquakes and what happens to the entombed fluids is not clear.

…until recently, scientists and environmental officials have assumed that deep layers of rock beneath the earth would safely entomb the waste for millennia.

There are growing signs they were mistaken.

Records from disparate corners of the United States show that wells drilled to bury this waste deep beneath the ground have repeatedly leaked, sending dangerous chemicals and waste gurgling to the surface or, on occasion, seeping into shallow aquifers that store a significant portion of the nation’s drinking water.

What about all that recycling we hear industry bragging about? Recycling fracking waste is a myth.

But in interviews, several key experts acknowledged that the idea that injection is safe rests on science that has not kept pace with reality, and on oversight that doesn’t always work.

“In 10 to 100 years we are going to find out that most of our groundwater is polluted,” said Mario Salazar, an engineer who worked for 25 years as a technical expert with the EPA’s underground injection program in Washington. “A lot of people are going to get sick, and a lot of people may die.”
ProPublica
Injection Wells: The Poison Beneath Us 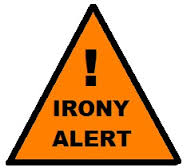 The waste also contains formation eating acids–hydrochloric, acetic, or hydrofluoric acid–that are used during the fracking process for the expressed purpose of eating through the rock formation.

Acidizing involves pumping hundreds of gallons of an acid solution down a well to dissolve rock formations blocking the flow of oil. After a number of hours, the solution is then brought back up to the surface and handled as a waste product.
StateImpact, February 12, 2014
Fracking with Acid: Unknown Quantities Injected in Texas

In Texas, like most other aspects of drilling and fracking, this process is “largely unregulated.” No one even knows how much acid has been used in Texas.

Then let’s reuse it.

In order to reuse the wastewater, industry needs an impoundment, or a place to store it and that might be in your backyard. Some people have learned the hard way what that means.

Here is a picture of the impoundment on the Hallowich property. The Hallowich family’s water was contaminated with acrylonitryle and some other chemicals I can’t say or spell. They had many health problems from the fumes and vapors. Eventually they sued, got a settlement that came with a gag order that included their small children and they moved away.

The corporation involved in the Hallowich case is also being sued by several families for an impoundment pit near them. The suit alleges their water was contaminated and they have many health issues.

What about recycling the wastewater?

To hear industry tell it, they are highly invested in recycling wastewater but a recent study shows talk is cheap.

Nicot found that the vast majority of water, about 92 percent, used to frack Barnett Shale wells in 2011 was “consumed”—never to return to the aquifer or reservoir again. Only around 5 percent of all the water has been reused or recycled “for the past few years.”
Observer, February 4, 2014
Study: In Midst of Drought, Fracking Industry Does Little to Recycle Water
by Forrest Wilder

Even if industry wanted to recycle fracking wastewater, the reality is Fracking Water: It’s Just So Hard to Clean. Many of the same questions exist with recycling:

One community is learning the hard way about the realities of recycling fracking wastewater.

We do need energy but we don’t need a boom. This boom is not about serving the energy needs of Americans or about energy independence. This boom is about quick profits and the last dash to enrich corporate executives and investors. Their profits come at the expense of the American public and our vital resources.

The shale gas boom has over produced natural gas and caused a big gas bubble and prices have fallen. Now that the same over production has happened with shale oil, industry is intensifying it efforts to export our domestic energy to create demand and maximize their profits.

Exports will increase the price Americans pay for energy.

Current consumption of natural gas in the U.S is ~69 bcf per day. When fully realized, the export imitative can increase demand to ~87 bcf per day, or an increase of about 26%. I believe that this rise in demand will not meet the equivalent rise in supply, thus forcing prices up. The laws of arbitrage tell us that when export volumes ramp up, the price environment around the world will be more uniform. As the cheapest provider of natural gas in the world, the U.S. will see increased prices as more and more demand will flow from Asia.
Seeking Alpha
Natural Gas Prices Are Here To Stay

Prices for natural gas in the U.S. are currently around $2 (Jan. 2016) per mcf while in China the price is almost $20 per mcf. As you can see from this map industry stands to make some hefty profits by exporting our domestic gas.

Now look at the map showing locations of the export terminals. (Larger version) 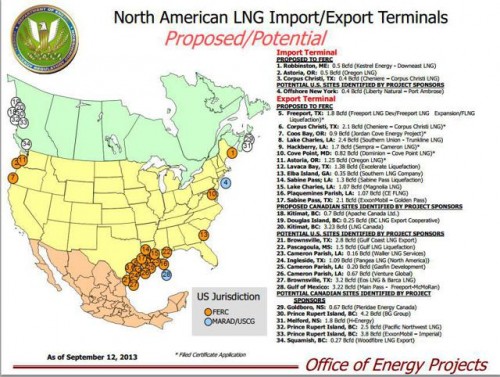 Not only will exporting shale oil and gas increase industry’s profits and raise the price we pay for our energy, it will magnify the impacts we experience. Fracking will increase nationwide, depleting and contaminating more water, air and land. Exports will require more infrastructure for processing and transporting the oil and gas. That means more pipelines running through private property and cities, more trucks and more railcar transportation. America becomes the United States of extraction.

Don’t be fooled! The shale boom was never about energy independence.

There is a better way to meet our energy needs without the destruction. All that’s needed is the political will.

In June of 2011, a scientist, an actor, a banker and a filmmaker were sitting around a table talking about their opposition to extreme energy extraction. Their conversation sparked an important realization – it wasn’t enough for them to be against something. They needed to be part of the solution. That day, Mark Jacobson, Mark Ruffalo, Marco Krapels and Josh Fox created The Solutions Project. Our Mission: Use the powerful combination of science + business + culture to accelerate the transition to 100% clean, renewable energy.

We should stop the boom and only produce the energy we need while fully implementing The Solutions Project’s 50 plans for 50 states.