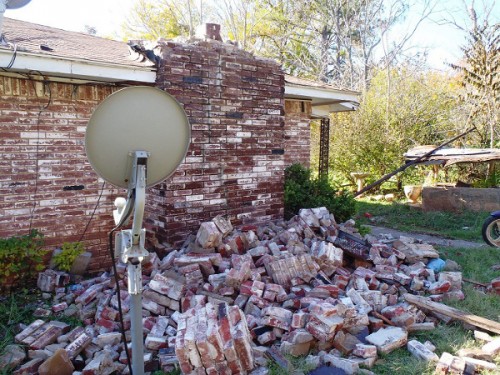 Justin Rubinstein, a geophysicist with USGS says the rumbles are likely triggered by wastewater injection wells from drilling projects. “What we think is happening at least for some of these earthquakes is these fluids more or less are acting as a lubricant on faults in the area, making earthquakes more likely,” Rubinstein said.

The geophysicist said everywhere has faults. He is “very confident” the “majority” of earthquakes are caused by injection.

The largest earthquake so far was a M5.3. He describe that quake as above the nuisance quakes that are, you know, like the ones in the Azle area that have caused damage to homes and property.

In the meantime, things are still rocking in the Azle area according to the seismic data HERE.

Also see: Swarms of Earthquakes Shake Up Shale Gas Fields Do tremors plaguing industry in Texas, Holland, and beyond offer a glimpse of BC’s future? By Andrew Nikiforuk, Today, TheTyee.ca

This comprehensive report covers the most recent frackquake swarm in the Azle/Reno and frackquakes in other areas and countries.  It also addresses other concerns such as frackquake effects on dams. Here’s a graph showing earthquake increases in the Alberta area. 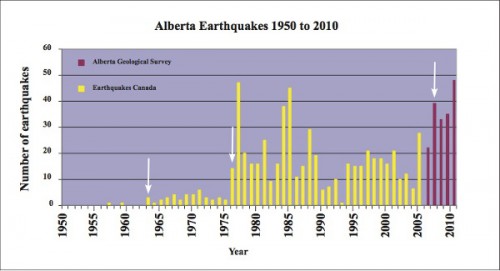 In particular, clusters of tremors have increased in areas of ramped-up tight oil activity and multi-stage hydraulic fracking, such as Brazeau County and Del Bonita near the Montana border. Landowners have also reported structural damage from tremors in Cochrane, Ponoka and Strathmore, where intense fracking has taken place. As a consequence, the government of Alberta quietly issued controls on fracking around critical infrastructure and imposed severe restrictions on activity near the Brazeau Dam after lobbying by TransAlta pressed for tighter regulations last year.