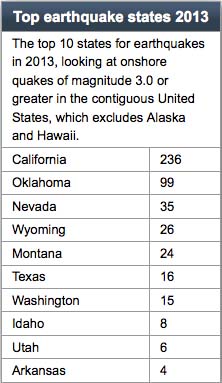 “The way we describe earthquakes is a bit like an epidemic,” said Ellsworth. “One earthquake has the potential to trigger others.” Source

Texas ranked 8th in 2013 in the top ten states for earthquakes of magnitude 3.0 or grater.

Texas had 16 earthquakes of magnitude 3.0 or greater, ranking it eighth for 2013. In 2009, it had two quakes of that strength. There have been many more quakes than that around Azle, Texas, but most were below magnitude 3.0. Source – EE News

Prior to the fracking boom, Texas was one of the least likely places in the United States for earthquakes.

Man-made earthquakes are nothing new.

“Man-made quakes are something new“

In 2000, Schlumberger, the biggest fracker, published a report  titled Seismicity in the Oil Field. Here is a bit from that report

If the stress change is big enough, it can cause an earthquake, either by fracturing the rock mass—in the case of mining or underground explosions—or by causing rock to slip along existing zones of weakness. The situation in regions of hydrocarbon recovery is not always well understood: in some places, extraction of fluid induces seismicity; in others, injection induces seismicity. In many areas where the rock is not under large tectonic stresses, the seismic energy released during induced events is low—typically of magnitude 0 to 3—and not even felt on the earth’s surface. However, if the rock mass is already under large tectonic stresses, the energy added by man’s endeavors can have a destabilizing influence. Even minor actions can trigger strong seismicity.
[…]
Some 40 examples are known in which reservoir production caused significant changes in the seismic activity of a neighboring region.

I highlighted underground explosions because most people don’t realize it but fracking requires underground explosions. They have to blow holes in the drill pipe and shatter the shale before they can frack and that takes explosives, which they haul through our streets. You can watch a 2 minute movie about perferation HERE and read a list of what might be in a perf gun (11 pages of skull and crossbones)

Recap: Injection, extraction and underground explosions all can cause earthquakes. We’ve known this for a long, long time.

There may be many kinds of injection but I’m going to talk about these three kinds:

As I’ve said before: Industry has done such a splendid job of propaganda that the media and public believe the only injection that causes earthquakes is waste injection. If you understand the fracking process and think logically about it, you will see that we are redistributing massive amounts of liquids and solids and causing imbalances. See these diagrams drawn by a petroleum engineer. Diagram.

Who’s your fracking daddy?The oil and gas industry has narrowly defined fracking to mean only the moment they inject their fluids into the hole and fracking is over when they pull out. They are trying to dodge responsibility for the whole realm of descendant problems their actions create.

The industry is like deadbeat dads who, in this case, inject toxic fluids into a hole in the ground and walk away from responsibility for the consequences.

The public ends up paying while industry walks away with their profit.

Here’s an example where fracking’s Joe Camel is harassing a journalist for an article about fracking earthquakes:

@AustinRue @LJWorld Fracking is a process. Disposal is a diff process. They’re regulated under diff laws, because they’re diff processes.

Please see: Dear Irving… for some frightening facts about man-made earthquakes and this post for some updated news.

Update: The epidemic continues with 4 earthquakes (so far) today. See the list of reported earthquakes on this post.