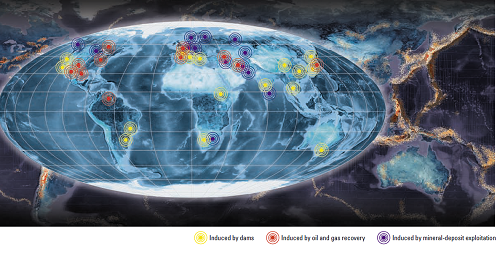 If you’ve been following this blog for very long, you know how I love industry’s own literature for disclosing how destructive their processes are. But, before we get to that, can we pause for a common sense moment?

I’m not a scientist and I don’t like playing scientist but sometimes I have to employ common sense and fourth grade science until the scientists catch up. So let’s talk about fracking earthquakes: These diagrams were drawn by a petroleum engineer. They show how fracking causes earthquakes but they don’t tell nearly the whole story.

Some people are highly invested in blaming the earthquakes on injection/disposal wells. At all costs, industry wants to point to anything but fracking as the cause. I don’t think it’s as simple as injection/disposal wells versus fracking because everything is connected. I would also caution you against too eagerly pointing to injection wells as the only cause unless you want a whole new marketing scheme from industry to convince us how useful drilling waste is. The fact is shale oil & gas extraction produces massive amounts of toxic waste and it’s got to go somewhere.

What follows is some common sense that may not be perfectly stated or perfectly scientifically accurate but just like the early posts about the hydrologic cycle, I’m circling in on it.

When Adam was about 8 years old, I put him on a little league team. Since we home schooled, he was always eager to share what he learned in “school” with his teammates. Our lesson for the day was how air has mass and weight. When he excitedly shared his discovery that air does indeed have mass and weight, they all laughed at him including the adult coaches. So, some people lack knowledge of even basic elementary science.

Methane/natural gas has mass and weight. So does condensate and all the water and fluids in the formation that are withdrawn with the extraction process. When you pull that mass out, it creates a void. What do you suppose happens when you have a void under the earth down somewhere in the strata? (HINT: Subsidence.) They do put fluids back in but it doesn’t always equal out and it’s not always in the same areas. Louisiana ships all there drilling waste to Texas to inject, Pennsylvania waste goes to Ohio. What do you suppose happens when they inject a lot of mass into the strate? (HINT: Uplift.) When they extract mass the ground will sink a little…or a lot. When they inject mass the ground will rise a little…or a lot.

Think of a paper bag

I’ve always lived my life trying to cram 10 pounds into a 5 pound bag. It never works. The bag rips and stuff falls out and I loose track of it all.

Earth is not exactly like a paper bag, of course, but consider the amount of mass being shifted around by the drilling boom.

It’s just common sense that this much mass injected into the earth is going to cause shifting.
From the horses’ mouth

The guys who work in the Gas Patch know what happens and how it works.

If you have ever worked in NG production , you will know what cause these quakes. its not so much fracking although that does have something to do with it. Just walk onto a production plant where 6 giant compressors the size of house’s are sucking gas out of the ground in huge volumes, we are talking about millions of cubic feet of gas in seconds. Now remember that gas is under pressure. its holding up the earth above it, and even though the areas are compressed into crevices, and layers that trap the gas, the pressures are enormous. Now compound that buy sucking the gas out, like a vacuum packer does a steak. The earth has to collapse, and that’s what does it , although fracking just creates the crevices and voids that then collapse when the compressors create the vacuum

If you look at the diagrams posted above and think about the gas and liquids as mass you can start to see that they are creating imbalances and altering the pressure. It’s simple physics and common sense.

Oh! But you want scientific proof? Alrighty then. Here ya go!  In their eagerness to sell their seismic recording services, Schlumberger admits fracking causes earthquakes and sometimes they are “severe.”

Seismicity in the Oil Field.

If the rock mass is already under large tectonic stresses, the energy added by man’s endeavors can have a destabilizing influence. Even minor actions can trigger strong seismicity.

If the stress change is big enough, it can cause an earthquake, either by fracturing the rock mass–in the case of mining or underground explosions–or by causing rock to slip along existing zones of weakness. The situation in regions of hydrocarbon recovery is not always well understood: in some places, extraction of fluid induces seismicity, in others injection induces seismicity.

In response to the recent earthquakes in Oklahoma and some comments on that post.

Soething not mentioned is that if you have shales and slates under stress and pump water into the formation under pressure, the water can act as a lubricant that will allow stratigraphic layers to slide more easily.