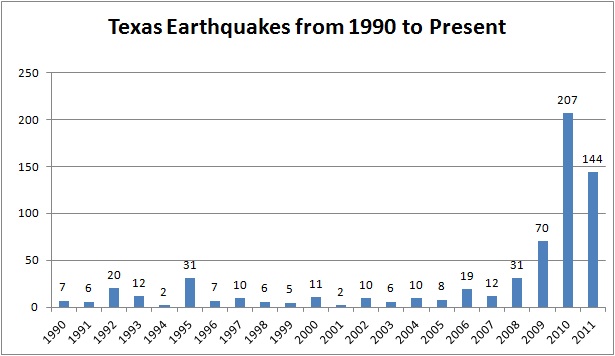 UPDATE: I had to change the title of this post because we are way past six earthquakes now.

My inbox overfloweth with earthquake notices from Oklahoma last night.

Some of the notices may be duplicates of the same event. I’m not sure.

Wow! Oklahomans, hang in there!

Recently the Oklahoma Geological Survey found that fracking may have caused some of the earthquakes.  Here is the report: Examination of Possibly Induced Seismicity from Hydraulic Fracturing in the Eola Field, Garvin County, Oklahoma

UPDATE: This just in…

UPDATE: From the comments…

5.6M Event Page – we felt this one here north of Dallas and someone in Decatur reported feeling their house shake. It was even felt in Grand Prairie.

UPDATE: And another one…

UPDATE: The title for this post is no longer appropriate. While we were sleeping, Oklahoma continued to have earthquakes. I have a spreadsheet that shows the earthquake activity since 1990 from a square area that includes Texas, Oklahoma, a teeny bit of New Mexico and Mexico. Notice the recent dramatic spike. 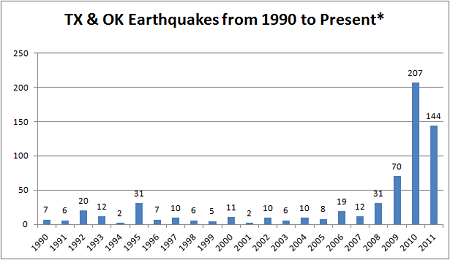 Graph data from USGS shows earthquake activity from 1990 to 10-28-11 in a square area that includes all of Texas and Oklahoma and a tiny bit of New Mexico and Mexico.

Obviously, this graph does not include the most recent earthquakes in Oklahoma. I am working on plotting all the quakes on a map that is color coded by year. It’s a striking visual.

The comments on this post from an oil field worker are enlightening. I advise everyone living in a Gas Patch anywhere in the world to go outside now and take pictures of your foundation. Take pictures every week. This might provide some documentation about the shape of your foundation prior to fracking earthquakes. I don’t know about other areas but Texans cannot get earthquake insurance so you are on your own.

Also see Industry literature admits that fracking can cause earthquakes.

See interesting comment at end of this post. Also–I’ve posted this before but if you are a new reader you have missed a lot–James Northrup says fracking is like blowing up bombs underground.