Subsidence is the downward displacement of the Earth’s surface relative to a fixed datum.

Subsidence has been building up in my backlog of important Barnett Shale blogging topics that I can’t get to because all hell breaks loose daily. You see, when you take something out of something, it leaves an empty space and sometimes–think about a balloon filled with air or water–the something that the something was in collapses. Now think about your home sitting on top of the Barnett Shale. Got the picture?

The consequences of mineral extraction will be passed on to heirs and all subsequent owners of the property. It is not uncommon for undermined properties to show no signs of subsidence for decades after mining is completed. Then, cracks and settlement begin to appear. In this situation the mining company may be long defunct and its owners long dead. There is no one to hold responsible – even if repair of any damage was written into the lease or sales agreement.

Of course, industry will say that drilling for natural gas does not cause subsidence. Watch how they word things. The drilling won’t cause the subsidence but the EXTRACTION can and that includes the extraction of the staggering amounts of water used in natural gas extraction. 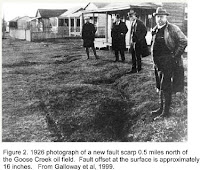 The first documented instance of land subsidence due to fluid withdrawal was from the Goose Creek oil field near the city of Houston. In 1917 oil was discovered on the margin of Galveston Bay near the mouth of the present-day Houston Ship Channel. After production of several million barrels of oil, bay waters began to inundate the oil field.

The subsidence also works the other way sometimes in the case of injection wells where they are injecting high volumes of water into formations. In that case, your house might rise up some.

Something weird is happening in the Arkansas gas-patch. UPDATE: they now have a video up.

I’ve heard rumors that some houses in Denton havelready sunk but I haven’t had time to track those down because I only work part-time on drilling issues. Help me help you.