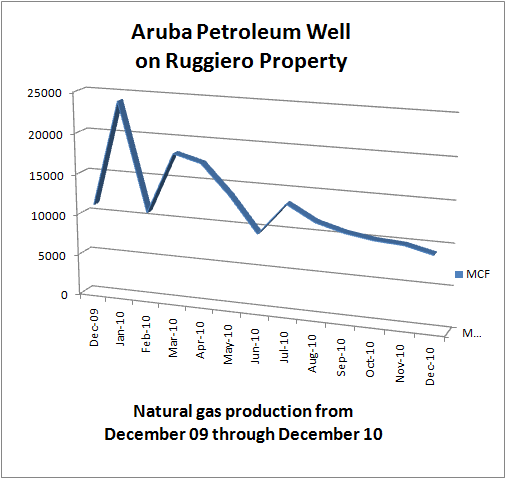 Below is some hard evidence that unconventional gas drilling is a ponzi scheme perpetrated on the American people by the Big Gas Mafia. Thank you to Christine Ruggiero for her careful record keeping and her explanations. Anybody can do this by using the production data on the Texas Railroad Commission website. It doesn’t take a lot of time because the data for these wells only goes back about seven years. There is no basis for their claim that these wells last 30 years.

This well is the one on our property that they continually rework and the reason for the upcoming compressor install. Anytime you see a spike up from one month to the next, it is because a rework and/or nitro lift unit was brought in. February 27th and 28th 2010 they brought in a nitro lift unit. Bad air samples again, but increased production from Feb 2010 to March 2010. 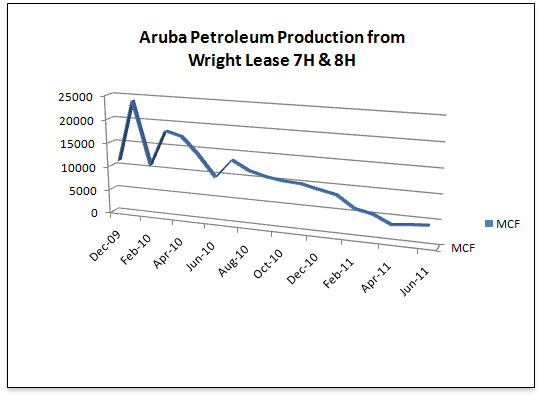 This [EnCana] well is right over the hill from us. You can’t see it from our property because of the trees. This is the one they recently came and reworked in June 2011 but told the TCEQ they wouldn’t spend much time on because they thought it was done.

Very close, 500 feet, from Aruba Petroleum Wright Lease 6H. Drilled in December of 2005. Judging from the production reports, it is done unless repeated nitro fracks or a compressor is coming. This well is a little over 5 years old and about 600 feet downhill from our home. 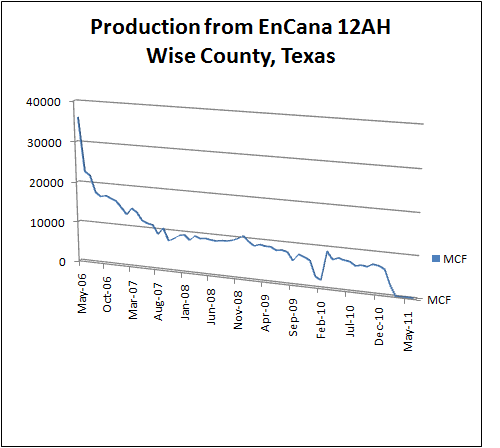 Below is the production report for Aruba Petroleum Wright Lease 6H. This one is the most meaningful I think so far. This one is the one.. . right outside our front door and on the other side of the pond.

This well was drilled on 08/29/2009. It stopped producing in May of 2010 2011. A compressor was installed in June 2010. Throughout the months of production, where you see spikes back up a bit, it is because of rework rigs and nitro lifts being brought in.

For example, on 07/25/2010 a nitro lift unit was brought in. This is the TCEQ incident where the AG is suing Aruba. The one where the TCEQ investigator got sick and TCEQ air samples showed 120 ppbv of benzene 200 feet from the Headen’s home. Here’s the TCEQ video of that event.

Notice the increased production following the nitro lift from July 2010 to August 2010. However, since the TCEQ’s referral to the AG for this event, notice the continual drop in production from August 2010 to May 2011. Aruba has not brought in a nitro lift since the AG announced they were suing Aruba on behalf of the TCEQ. It took a mere 10 months for this well to die off completely. It probably would have happened sooner without all of the previous reworks and nitro fracks.

In June 2011 Aruba instaled a compressor at this site which resulted in an increase of production from 0 MCF to 5554 MCF. So I guess in order for operators to live up to their production estimates it will require monthly nitro fracking (see summa results) or the installation of a compressor 18 months after drilling to even remotely begin to bring the well back to production. Production not even close to what it was in the first few months.