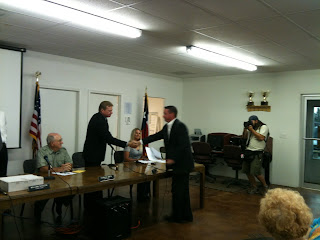 I taped Calvin’s speech but the sound of heavy raid and thunder makes it inaudible. Here is Sciscoe’s touching speech instead.

In the last 4 years, this council has faced difficult decisions, many challenges and much controversy. We have faced large corporations, private interest, state agencies, federal agencies, the eye of the media and political candidates and officials at all levels of government. I do not expect the next 4 years to be any easier.

Mayor Tillman has served this community with a dedication to duty and a sense of purpose unmatched by any elected official I have even known. He has not limited himself to the borders of our city, our country, or state or even our country. he as authored resolutions protecting the health, safety and well being and property rights of our citizens, which once passed by our council, have been adopted by scores of communities representing millions of citizens.

He has raised the standard of leadership, for all mayors everywhere to aspire. He has been a protector and defender of our citizens not a regulator. He has been an ever-vigilant watchdog protecting us from those wishing to destroy and steal our constitutional rights.

It has been an honor and a privilege for me to serve on this council with Mayor Tillman.

Mayor Tillman, Thank you for your service to the Town of Dish. 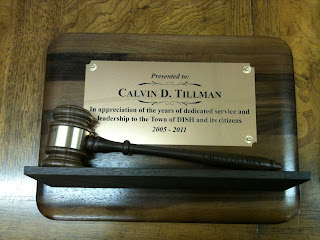 There are two reasons why industry should not rejoice: 1) Sciscoe won’t take any BS from anybody, and 2) the Town Council voted to hire Tillman as a consultant for $1 per year.

After the meeting there was a tornado. VIDEO I’m taking it as a sign.