Look at Google Maps and the area looks just like the Barnett Shale area on either side of 287. They are covered up with drilling sites.

UPDATE:
There have been about a dozen recent earthquakes in this area and they suspect they are caused by oil and gas drilling activities.

Snyder’s increased earthquake activity may be due to oil drilling

“The presumption is that they are related to either the extraction of oil or pumping fluid into wells for secondary oil recovery,” said Dewey.

According to the U.S.G.S., another reason could be simple geology.

“This current activation could represent some activation of a very old fault, or it represents new fracturing of rock due to the change in the stress,” said Dewey.

But the U.S.G.S. said this marked increase in earthquake activity only began in 2008. Before then, researchers reported no earthquakes near Snyder for the previous 20 years.

Here’s a look at the drilling activity in the area: 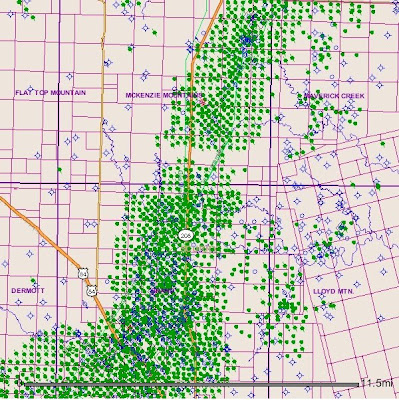