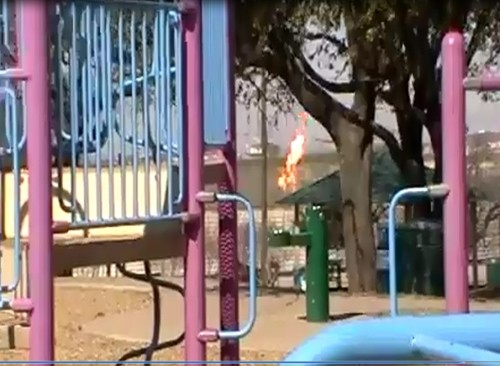 Cathy McMullen evacuated Wise County because she was surrounded by fracking. She moved to Denton where she thought it would be safe.

Shortly after Cathy, I evacuated Wise County because we were surrounded by fracking. We moved to Denton where we thought we would be safe.

Range Resources put up a t-post with a ribbon on it in the field across from McKenna Park near Cathy’s new home. Anyone who has lived with fracking knows what the beribboned t-post means. You are about to get fracked!  Cathy learned that Range planned to frack five wells a few blocks from her new home.

She started rounding up neighbors to fight back. Somehow–serendipity–she rounded me up. This was before I started working for Earthworks’ Oil & Gas Accountability Project.

A few times, those living room meetings included City Councilmen, Gregory Dalton or Jim Englebrecht. There were also doctors, and more doctors who stood up against drilling so close to homes, parks and medical facilities. We all became part of the Denton fracking opposition and we started speaking and making citizen presentations at City Council meetings. Gradually, the opposition grew.

In August 2009, I moved to an apartment complex across the street from Evers Park and close to my work at UNT’s Research Park. Later I rented an apartment from Denton’s new mayor, Chris Watts.

One day Cathy called to tell me that Range Resources was dumping their sewage into the field behind the drill site across the street from McKenna Park. Dumping raw sewage is a big money saver for the industry but it is illegal. Cathy and I called that sewage dumping event DoodyGate. Here’s the poop on DoodyGate. Cathy and I walked through the muck wearing sandals to capture the essence of DoodyGate on VIDEO.

In May 2011, I accepted a full-time position as Texas organizer with Earthworks’ Oil & Gas Accountability Project. I am grateful that Earthworks has allowed me time to help the Denton Community, a place I still call home, as they faced increased mistreatment by the oil and gas industry. Earthworks helps communities like Denton when we are asked. Denton asked for Earthworks’ help.

DoodyGate took place over five years ago. We are still meeting in living rooms but the conversation has changed. This website has chronicled much of what has happened in Denton the past five years. It is easy to see that industry has brought this opposition on themselves. We tried to be reasonable and responsible but they refused any limitations on their activities.

Denton will soon be the first city in Texas to vote to ban hydraulic fracturing. No matter how the election turns out,  the conversation has forever been changed. Nowhere else will the fracking industry be able to run over and abuse residents like they have in Denton. Never again.

Some additional highlights from the past.