The contractor hired by Range Resources to drill at Rayzor Ranch likes to save money by cutting a few corners here and there. Rather than paying to have their sewage hauled off, they decided to route it from the two 5th wheel travel trailers used on site into the field behind the drill site. Ew!

A vigilant neighbor, Cathy, found the evidence, toilet paper and all, and took some video that you can see HERE. That link will also explain a lot of the backstory and how I happened onto the scene. You have to read the backstory or the rest of this won’t make as much sense.

Range Resources is terribly sorry for the poor judgment of our contractor Pioneer Drilling Company and the foreman has been warned that taking shortcuts of any kind is not an acceptable practice.

If only Waller has said that; but he didn’t. Here’s what he said:

Waller said he believes residents overreacted to the spill out of anger over recent air quality tests that found elevated levels of benzene and other harmful chemicals during several stages of the drilling process at the first Rayzor Ranch well.

The Railroad Commission “did call by phone, and we did explain to them what the situation was, and they understood the political issues that were going on for all those people to call,” Waller, of Range, said. “But there’s nothing we can do about it except try to deal with the public there.”

I can promise you that we didn’t overreact to the spill. We laughed like maniacs. In trying to get out of the deep doo doo on the far side of the sound barrier, the drillers created a shit-storm of drama and attention with their pretend spill. 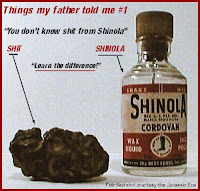 Mr. Waller, who holds a Bachelor’s degree in Environmental Science and a M.E. in Atmospheric Science Bachelor of Arts degree, is a certified landman and a CPA. Rodney Waller does not know shit from Shinola when it comes to accurate science. He is a bean counter, not a scientist! And one of his bean counting gigs was with Arthur Anderson the firm that counted Enron’s beans.

And would somebody please, PLEASE explain to me WTF politics has to do with any of this?