Update: CBS11’s Jason Allen covered the foaming gas wells in Mansfield and the Denton residents who are on the DHS watch list

Asked to clarify his comments on Wednesday, Grawe told CBS 11 News that he could not say anything about that meeting. The Denton Police Department and the city manager’s office both said they were unaware of any issues with civil disobedience or residents being on a watch list.

Cathy McMullen, who works with a drilling awareness group in the city, said that she thinks there may be some truth to the statement, but believes that it was meant to intimidate. “You have to know they would use any means that they needed to try and control you or watch a conversation or intimidate you,” she said.

A petroleum engineer had some questions about the foaming gas well:

my question:  what test did the firefighters perform on these bubbles?  and what is a firefighter’s idea of toxicity?  and why didn’t the regulatory agency that governs Oil and Gas exploration do some testing?

or god forbid, someone marches out to the camera with a MSDS and shows folks what type of ‘industrial soap’ aka surfactant.

This is more of the industry’s Psychological Warfare against the American public. 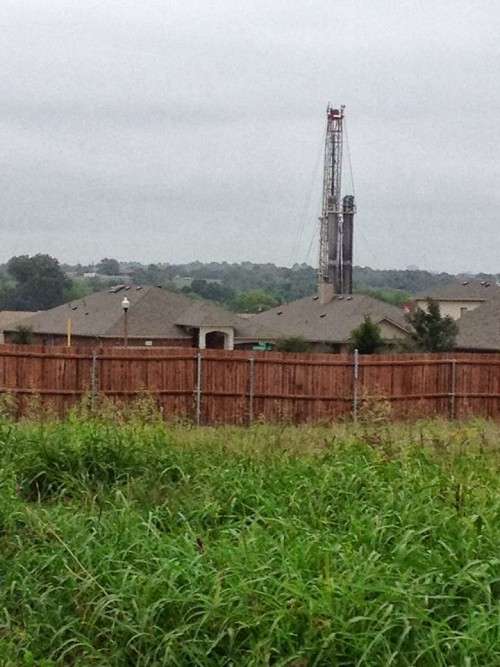 Last night there was a candlelight vigil for the Vintage and Bonnie Brea neighborhoods that are about to get fracked by EagleRidge Energy. This vigil attended by teachers, retirees, children, families and students was held outside before the city council meeting. RT TV is in North Texas this week reporting on fracking in Texas so they were there to capture it on video.

This news segment is titled: Fracking protest in Denton, Texas

Remember my blog post referencing comments made by Mark Grawe, Chief Operating Officer at EagleRidge Energy (EagleRidge), Denton, Texas that indicated residents who object to his company’s reckless operations way too close to their homes, schools and parks are terrorists worthy of inclusion on the Department of Homeland Security’s watch list.

Here is the audio recording of Grawe’s comments. Link fixed so tape will play when clicked.

I have a few questions for the Department of Homeland Security regarding this terrorist watch list that:

I think you can see that there is no threat from any of the people involved in the “protest.”

Thank you RT for covering our fracking nightmare.

About RT
RT is a global multilingual television news network, broadcasting around-the-clock from Moscow across five continents to more than 100 countries in English, Arabic and Spanish. The RT network also includes RT America, broadcasting from RT’s Washington, DC studios, the documentary channel RTDoc, and a brand new video agency, Ruptly. With a global reach of over 630 million people – or 28% of all paid cable networks’ subscribers – and more than 2.7 million hotel rooms worldwide, RT covers the major political, economic and cultural issues of the time for viewers wanting to question more. The best news reports, stories and programmes can be found on RT’s YouTube channel, where the number of views has already exceeded 1 billion, making RT the first TV news channel to break this record in YouTube’s history and also making the network the largest provider of news video footage on this world’s most popular video platform. According to official ratings by the UK’s Broadcasters’ Audience Research Board, RT is the third most popular TV news channel in Great Britain after BBC News and Sky News, and scores higher viewership than other foreign news channels measured by BARB, including Al Jazeera English, Fox News and Euronews (BARB ratings for the 3rd quarter 2012). In the U.S. more than 85 million viewers receive RT around the clock. Nielsen has found RT’s audience in key U.S. cities to be bigger than that of other major international news channels including Euronews, France 24, Deutsche Welle, Al Jazeera English, NHK World and CCTV News. According to Nielsen, the average RT viewer in America is a male aged between 35 and 49, and either a business owner, self-employed, or employed in a management role; over 20 percent of RT viewers hold a Master’s degree or a Ph.D. RT is the only Russian TV news channel to garner two nominations for the prestigious Emmy International Award.