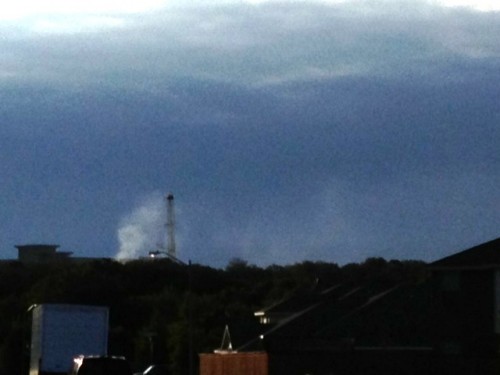 Few operators have worse behavior than EagleRidge. I blogged about them this week and posted a video that shows lack of concern for worker safety. Today we learn the City of Denton has issued a restraining order against EagleRidge. Apparently they believe rules are not meant for them.

IMPORTANT UPDATE: I just got word that Denton requested a temporary restraining order but it was denied. There will be a hearing in 10 to 14 days so people need to be in that courtroom.

Here is a photo taken last night by a Mansfiled resident. This shows air emissions coming from what residents call the EagleRidge Northeast drill site. 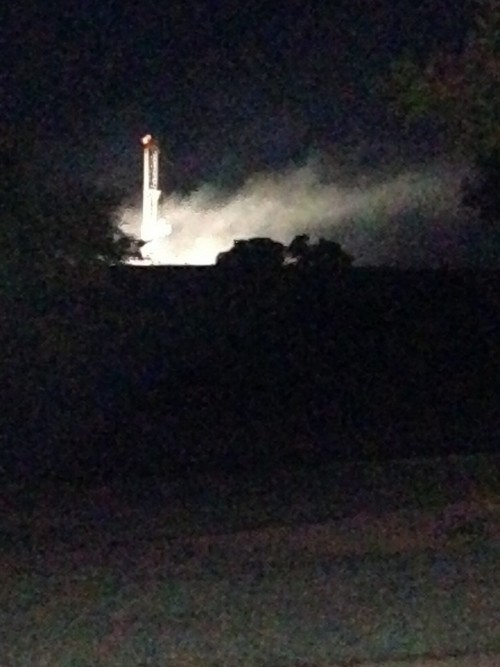 And here is a photo from a different Mansfield resident taken in September from what residents call the EagleRidge southwest pad site.

So when industry says they won’t contaminate your air, they are just blowing smoke up your backside. The Mansfield ordinance requires filters that will prevent some of these emissions but that rule is not being enforced and I think I know why.

As reported today in the Texas Tribune, Mansfield has no separation between industry and city.

“It does allow citizens to control what’s going on in their own cities — and that’s a good thing,” said Stephen Lindsey, the mayor pro tem of Mansfield, a suburb of Fort Worth, one of Texas’ first major cities to embrace drilling. City rules should include flexibility for companies, added Lindsey, who works for Quicksilver Resources, a Fort Worth-based drilling company.

In that same article, Trinity East president said he was “baffled” by the response from Dallas residents.

“We’re sort of baffled,” said Steve Fort, president of Trinity East, which paid Dallas $19 million in 2008 to lease 3,500 acres of land and spent millions more on planning. “We feel like we paid for something here that we’re not receiving.”

Industry has no one to blame but themselves.