Something terrifying is buried in today’s Denton Record Chronicle article, Few answers in April gas well blowout. I’m going to bury it here too so you will need to keep reading. But here’s a hint: Sounds like 1st ———>

Three months ago there was a blowout during completion of a well in Denton, Texas. (See scary VIDEO) I wish I could say that this post will answer the questions about what happened but I can’t. The answer to that question is being held until it’s certain that no one is paying attention any longer or until EagleRidge finishes converting all the old, vertical wells to horizonals.

Three months prior to today, the City of Denton played a game of Sesame Street, we watched a home video,  and we played the popular games Name the Fracking Accident and Scrubba Dub Dub while watching an episode of Father Knows Best during an email leak. Now we have a timeline of events that should be read while listening to this music.

As usual the TCEQ showed up late. But still, they trapped 46 of the 84 hazardous air pollutants they tested for.

The downwind sample detected 46 of the 84 hazardous air pollutants tested for, including benzene and ethylene dibromide, or EDB. Upwind, the sample detected 27 of 84 chemicals. Neither benzene nor EDB was detected upwind, state records showed.

Both benzene and EDB have been found to cause cancer, according to the Agency for Toxic Substances and Disease Registry.

Denton, you have been co-exposed again and, remember I told you recently about this: Study: Co-exposures of two chemicals at safe levels doubles chances of cancer.

ETHYLene dibromide? Where have you heard that before?

Ethylene dibromide is a highly carcinogenic chemical that has been BANNED by the EPA for most uses but it keeps turning up in the shale play areas in Texas, especially in Denton.

Despite Admission by Drilling Company, Texas Regulators Refuse to Act

DENTON, TX, Aug. 23 – State air tests in two communities in the Barnett Shale gas patch found strong evidence that a cancer-causing chemical — banned for most uses for more than 25 years — was used in hydraulic fracturing of natural gas wells, according to a newspaper investigation. But despite the test results and the drilling company’s admission that it used a banned biocide, state regulators have recanted their own findings and refuse to take action.

The Denton Record-Chronicle reported Sunday that air tests by the Texas Commission on Environmental Quality (TCEQ) found levels of 1,2-dibromoethane, or EDB, at least six times since December 2010 near natural gas facilities in the towns of Argyle and Bartonville. EDB, formerly used as a fumigant pesticide, was banned by the U.S. Environmental Protection Agency in 1983 for all but minor uses after it was found to cause cancer and reproductive damage. Four of the six detections were over TCEQ’s safe level for long-term exposure.

Community residents say they are sure the chemical came from natural gas operations because they took their own baseline samples of the air, water and soil before wells were drilled and found no EDB. Last December, a representative of the company operating three of the sites, Gulftex Operating Inc. of Dallas, told the Bartonville Town Council they had discovered they were using a “biocide that was . . . banned in commercial uses” and would find an alternative, according to an audio recording of the meeting by the Argyle-Bartonville Community Alliance.

In response to complaints by the Alliance, TCEQ officials at first said there was nothing they could do because they believed the chemical came from historical use of EDB before the wells were drilled. Then, two days before the newspaper prepared to publish its investigation, TCEQ backed off from its own air tests, saying they couldn’t be sure they had found any EDB in the air. An agency spokesman said the results “may be due to the sampling and analytical procedure itself instead of actually being present in the ambient air.”

“So their scientific testing is not very scientific?” asked Susan Knoll, a member of the community alliance. “If what they’re doing is not accurate, then who in tarnation is supposed to protect us from what’s happening in our community?” Detailed data from tests by the state and the alliance are on the alliance’s website, and the group has appealed to the EPA for a federal investigation.

Sharon Wilson, an organizer with Earthworks’ Oil & Gas Accountability Project, which works closely with the alliance, said the incident is another example of state regulators’ inaction in the face of evidence of health risks of fracking.

“It looks like the TCEQ is trying to preempt a scandal by pretending it never happened,” said Wilson. “Or else, they are admitting their science is unsound and we really don’t know what’s in the air we are breathing in the Barnett Shale. This is a scandal, plain and simple. If TCEQ can’t clean up their act, then we need a new sheriff in town.’

There are many opportunities in Denton right now and upcoming for further air sampling.

EagleRidge believes they own Denton and, as the DRC article shows, they break rules. I warned you they would strike again and they are. Thursday I met a friend for lunch at Denton’s new restaurant The Bowlery. After lunch I took a drive and a few pictures. It wasn’t long before I felt that familiar tightness in my throat. It subsided when I left the Denton drilling area. 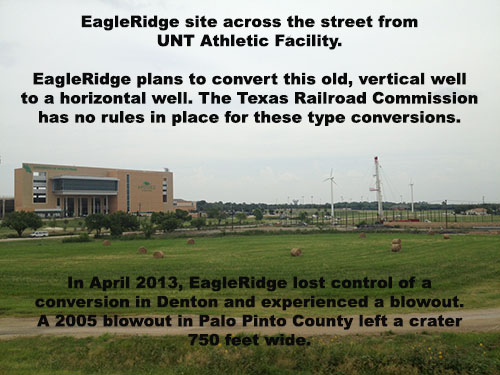 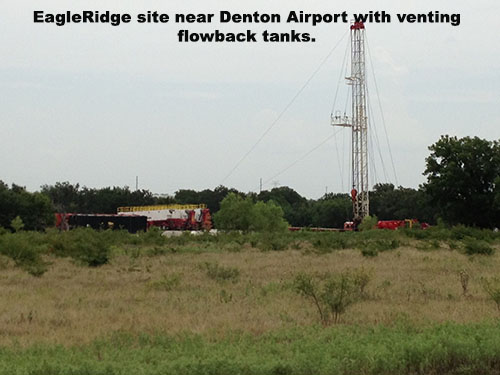 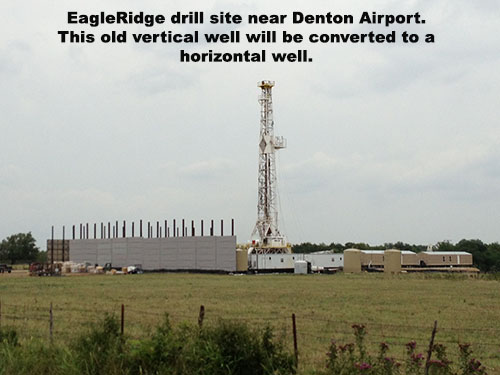 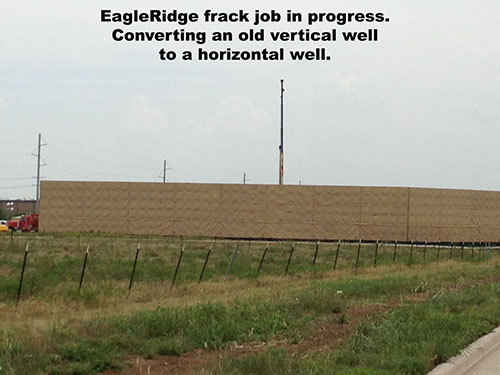 No one is coming to save you Denton. You will have to save yourselves.