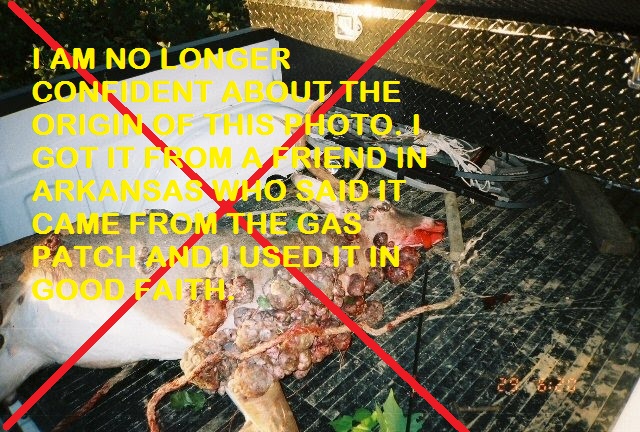 ProPublica reports on the spill of hydraulic fracturing fluid by Halliburton at the Cabot operated well in Dimock, PA.

The spills, which occurred at a well site run by Cabot Oil and Gas, involve a compound manufactured by Halliburton that is described as a “potential carcinogen” and is used in the drilling process of hydraulic fracturing, according to state officials. The contaminants have seeped into a nearby creek, where a fish kill was reported by the state Department of Environmental Protection. The DEP also reported fish “swimming erratically”.

Halliburton spilled the frack fluid twice at the same site on the same day! As the operator, Cabot is ultimately responsible and the ProPublica article recounts the many spills and problems brought to Dimock by Cabot drilling activities.

The drilling fluid spill Wednesday may be the most serious yet, because it involves chemicals that are known to pose a risk to human health and has spread into the area’s surface water system.

According to a Material Safety Data Sheet provided to the state this week by Halliburton, the spilled drilling fluid contained a liquid gel concentrate consisting of a Paraffinic solvent and Polysaccharide, chemicals listed as possible carcinogens for people. The MSDS form – for Halliburton’s proprietary product called LGC-35 CBM – does not list the entire makeup of the gel or the quantity of its constituents, but it warns that the substances have led to skin cancer in animals and “may cause headache, dizziness and other central nervous system effects” to anyone who breathes or swallows the fluids

This deer was found in an area in ARKANSAS with heavy gas drilling activity.

UPDATE 2: Some woman named Lindsey, posted this picture on her Facebook wall and claimed the deer has cancer and was shot in Dimock, PA. That’s not true BUT I am not the one who made those claims.

To see a few cases where animals were harmed by drilling/fracking:

Notice that Halliburton is not required to release the complete composition of chemicals spilled because hydraulic fracturing fluid is exempt from regulation under the SWDA.

H.R. 2766:Fracturing Responsibility and Awareness of Chemicals Act of 2009 already has support from 160 organizations despite industry claims that the bill has a “Death Panel” and despite large infusions of industry cash at all levels. We still need a Texas co-sponsor. Please look at this list of Texas Congressional Members and their SCORECARD on key environmental and energy votes. Please write your representative or find a more reasonable one and ask them to co-sponsor H.R. 2766 today! It should be glaringly obvious that we can expect no help from our state regulatory agency so please act before it’s too late.

Gas Wells Are Not Our Friends