I first met Carol at the GASLAND showing in Fort Worth. She traveled over 250 miles from her goat farm west of Junction, Texas to watch GASLAND and show us a sample of her groundwater.

Carol remembers seeing the rig go up on her neighbor’s ranch. She remembers the “smoke” that that lasted for days, but she doesn’t know the exact date when her neighbor’s old gas well was re-fractured to increase production. She knows it was in early June 2009 and that shortly after or during the fracking, she lost water pressure on her well. When the pressure finally returned, her well water was different. First, the normal green algae disappeared from her goat’s watering tanks. Then the goldfish died. The water turned reddish and a red sediment appeared in the bottom of the tanks. 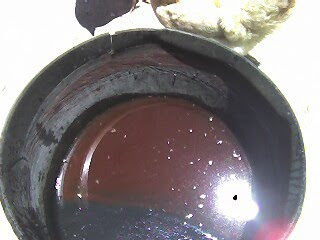 After she retired, Carol moved to a remote area of Texas to raise goats and as much of her own food as possible. She wanted to live gently on the land and practice sustainability. She used water sparingly and only used the dishwasher in her home to drain clean dishes washed by hand. That’s why she was puzzled by the red water stains that appeared in her dishwasher.

Now fearful of using her once clean well water, Carol robbed her emergency fund in October 2009, to purchase a rain harvesting system. While she waited for rain, Carol, her goats and her other animals drank the only source of water available, the contaminated water from her well.

In January 2010, Carol’s goats had normal births followed by an abnormal postpartum heat cycle. In March the heat cycle was again abnormal and continuous. They continued to drink the only water available, the contaminated well water.

The rains finally came and on March 29, 2010, Carol began using rain harvested water on a limited basis in her home. By May, after a year of drinking the contaminated water, Carol had enough harvested rain water to convert her home and animals to only rain water for drinking.

Two blind kids were born on July 7, 2010, to a nanny that drank the contaminated water during gestation. 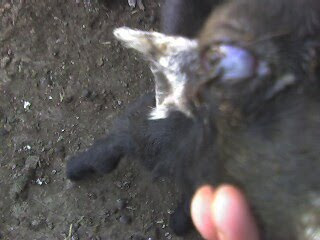 One blind kid is still living. She is weak but her will to live is strong and Carol’s heart is too tender to deny her the chance. He sister was not as lucky so the vet ended her misery.

The blind kids’ pupil-less eyes look just like the eyes of the 10 calves that were stillborn in Pennsylvania. The mama cows drank drilling waste during pregnancy. Industry will claim coincidence but it seems an opportunity ripe for research. 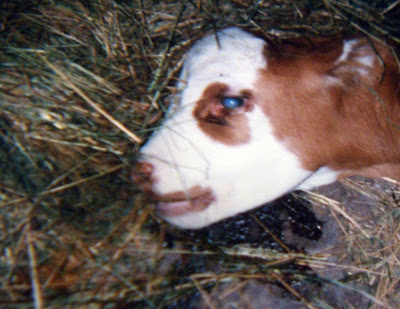 (Notice in the video, the red residue left by the contaminated water.)

Normally, Carol’s pregnant nannies would be drying up but they are continuing to give milk while pregnant. Normally, extra milking wouldn’t be a problem for Carol’s hardy constitution and unusual good health. But Carol doesn’t know where normal is anymore. Recently, her constant and extreme exhaustion makes it excruciating for her to continue the abnormal milking.

Now, Dear Readers, here is the most tragic part: Carol lives on Social Security and what she can produce on her farm. She cannot afford to have her water tested and we all know the water spoiler will not step up. This breaks my heart. Carol is a kindred spirit. Like me, she raised her son alone while struggling to earn a living. Like me, she is a farmer at her core. We cannot let this stand!

Let’s all please chip in to help Carol get her water tested. Please make a small donation to her water testing fund. I kicked it off with a $50 donation. The data obtained from her water tests will benefit us all