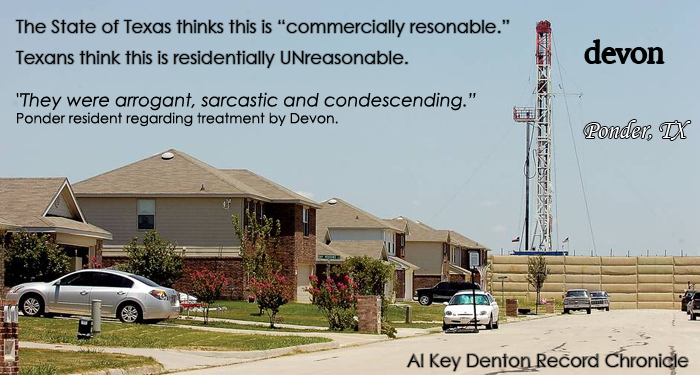 H.B. 40, as written, will overturn almost a decade of my work in the Barnett Shale. That’s hard to swallow, but this dumb strategy by the Texas GOP will produce lemonade.

Today I watched much of the testimony on H.B. 40  and H.B. 539 again. This time I had my waders handy but they weren’t much help because the bullshit flowed right over the tops. The hearing was 8 brutal hours long and filled with ignorance and lies. Thanks to everyone for hanging in there. Below are some random and not so random thoughts about the hearing and an update on H.B. 40.

The state thinks Devon Energy is a “prudent and reasonable” fracking operator. 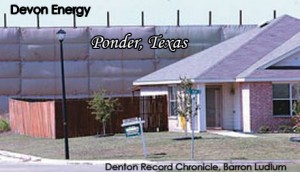 Devon is not a good model of a “prudent and reasonable” fracking operator and here are two of many examples:

Fracking hell: What it’s really like to live next to a shale gas well is an investigative report by The Guardian about what happened in a Ponder, Texas neighborhood.

The Guardian report has a 9 minute video of the neighbors describing their experiences when Devon drilled some wells 300′ from their homes. Behind these neighbors’ homes was a huge, vacant field. There was no reason to drill so close to homes. But there was no way to stop them. And, while Devon claims ad nauseum that they are willing to negotiate, regular people report they have had little success at those negotiations.

“We complain and the city doesn’t respond,” Holt said, adding that instead, company representatives came out to talk to residents. “They were arrogant, sarcastic and condescending. We elected the city officials to represent the city, not Devon Energy. As of this date, there has been no response to Veronica’s letter. We deserve better.

Devon must scorch the earth in Denton.

Despite the fracking ban, the city must update their gas well ordinance to deal with existing wells. They also need to update in the event the ban is overturned. So, the never-ending task of tinkering with the Denton gas well ordinance continued Tuesday night at a council meeting. I didn’t go because I was giving a presentation to the City of Irving Green Advisory Board.

I watched the meeting online because I just can’t get enough bullshit. Chance Wilson spoke for Devon. [An aside: Chance is no relation but I know him because he went to school with my oldest son when we lived in Wise County. Shame on you Chance.]

In trying to plan for new development that accommodates gas will drilling, the city came up with co-locations where operators can drill multiple wells from one pad site to access all their minerals. That way the city can still have development for neighborhoods. You know, neighborhoods, where the people live.

But that doesn’t work for Devon. They claim it will prohibit them from accessing their minerals.

Chance used his emphatic and forceful voice with an underlying tone of threat when he said:

“We have consistently worked with municipalities, surface owners, and mineral owners in North Texas to be a good neighbor and in an effort to minimize any impact our operations have on the surface.”

This reminds me of the time when Range Resources made some silly claim about their good reputation. People wrote from all over disputing that claim. I’m the one people call with complaints about Devon and there are many.

Chance uses the Cole Trust as an example of Devon’s good “neighborness”. There are 15 pad sites on the Cole Trust and they need every one of those to “fully develop” the minerals. Devon is unable to develop a 640 acre unit from one pad site.

Devon wants an exception to the co-location and they want to draft the language in the ordinance that gives them the exception.

The bottom line according to Chance:

Get out of Devon’s way little people!

I have attended years of council meetings all across North Texas where a Devon representative spoke. No matter what the regulation might be, even if it’s something Devon does routinely, they will oppose having it in writing. This is something we have witnessed at many council meetings.

Devon is not a good neighbor. That’s a platitude they issue with their emphatic and forceful voice with an underlying tone of threat . If you say it a million times, it’s doesn’t make it true.

The committee, especially Rep Darby expressed confusion and disbelief that people can see the giant loophole in H.B. 40.

But much of the day was spent parsing the confusing language of the legislation pertaining to what a city can and cannot do. The bill stipulates that local government is limited to regulating “only surface activity that is incident to an oil and gas operation” with ordinances that are “commercially reasonable” and don’t “effectively prohibit an oil and gas operation.” Elsewhere in the bill, “commercially reasonable” is defined as a “condition that permits a reasonably prudent operator to fully, effectively, and economically exploit, develop, produce, process, and transport oil and gas.”

Most of the city officials were too nice to come right out and tell the committee that oil & gas operators are bullies and are not “prudent and reasonable.” The Fort Worth attorney came closest when she said they had to keep amending their ordinance because the operators were not reasonable.

I heard yesterday there will be a substitute bill and Fort Worth officials are helping with the wording.

The State wants your city to be like Fort Worth

The oil & gas industry loves Fort Worth and that’s the model the industry has instructed the Texas Legislature to use for all other Texas cities.

I want to revisit the Fort Worth air quality studies because there were many lies told about that in testimony.

The industry funded air study found the highest levels of formaldehyde measured anywhere on the planet besides Brazil, higher even than the Houston Ship Channel, were found in Fort Worth at gas well sites. Now, the industry repeats the lie over and over that Fort Worth air is safe and that lie goes unchallenged by the media and lawmakers. Thank you Lon Burnam for pointing this our in your testimony.

Another air study conducted by Fort Worth found benzene 94% of the time. There were many other problems with this air study. Two great sources for more information are an opinion piece by attorney Jim Bradbury, Fort Worth Air Study Has Gaps, and FW Weekly has a great analysis of the air testing in their article, Blowing Smoke: Fort Worth’s air quality study makes things as clear as smog.

The nearly 9 hours of testimony for these bills is archived HERE.

I prepared 3 minute testimony for each bill with visuals.

When we arrived in Austin shortly after 11:00 AM, we learned that testimony on both bills would be 3 minutes total. I revised my comments several times while listening to the oil & gas lobbyists testify for hours before the real people got their turn. By the time my turn came 4 hours and 43 minutes into the testimony, the bullshit was so thick I began by saying “I wish I’d worn my waders.” The committee asked lobbyists endless questions but they had few questions for the real people who actually live with fracking. That steamed me so I brought it up at the end of the panel. At 4:57:30, Rep. Darby replied:

Darby: Ms Wilson, to answer your question, I don’t think any of us know where to start asking some of these questions.

The panel that included Denton’s Mayor, Chris Watts, and city attorney, Anita Burgess, starts at 2:58. Burgess speaks against H.B. 539, calling it “City Pays” at 3:05. Watts speaks at 3:08:42. The committee grilled Watts. I thought the questions were excessive and meant to humiliate but Watts was patient and gracious. The questioning by Tom Craddick was so rude and ignorant that I transcribed it.

Craddick: Mayor, I’d like to ask you or your city attorney. Do you believe as the law stands today, if House Bill 40 did not pass, that it gives cities the right to ban fracking in the state?
Mayor Watts: We are currently under litigation in that regard so…
Craddick interrupts: I’m asking you as the Mayor of Denton and the city attorney, do you, representing the City of Denton believe that the way the law is written today, it gives you the right to ban fracking.
Mayor Watts: Mr Craddick, I will respectfully decline to answer that only because we as a city council did not adopt that. It went to a vote and it’s currently under litigation.
Craddick: Do you think that, if we passed House Bill 40, as it is written today, do you think that would change whether or not the city of Denton, or any other city in the State of Texas has the right to ban fracking.
Mayor Watts: In my opinion, if this bill passes as it’s written today, simply by section C that says: May not enact any ordinance that effects or otherwise … it very well …
(Clarification of the question and restatement.)
I think it would make it very unlikely that a city would be able to ban hydraulic fracturing.
Craddick: Okay, but you think that today, as the law is, as it is today, if you made an opinion on that, what about the law today, do you think it gives the cities the right to ban fracking?
3:35 Mayor Watts: Again, I respectfully decline to answer that because we are in litigation…
Craddick interrupts: How did you vote on it?
Mayor Watts: How did I vote on?
Craddick: On the proposal to ban fracking in front of the city council . Aren’t you…
Mayor Watts: I voted against adopting the ban and for sending it to the voters.
Craddick: Okay, so you passed the buck.
Mayor Watts: That’s certainly…you’re entitled to that, but no.
Craddick: Thank you. I am.
Mayor Watts: You bet.

So many things wrong with this exchange.

Some other testimony you might enjoy: (If your testimony is not included and you want it to be, send me the time. I confess that I forgot to write down the times of some excellent testimony.)
Calvin Tillman 4:06:37
Cathy McMullen 4:09:56
Scott Anderson 6:22 – may be constitutional challenges.
Adam Briggle 7:14
Robin Schneider 8:28

Update and next steps.

The Energy Resources Committee will have a substitute to HB 40 out by the end of this week. 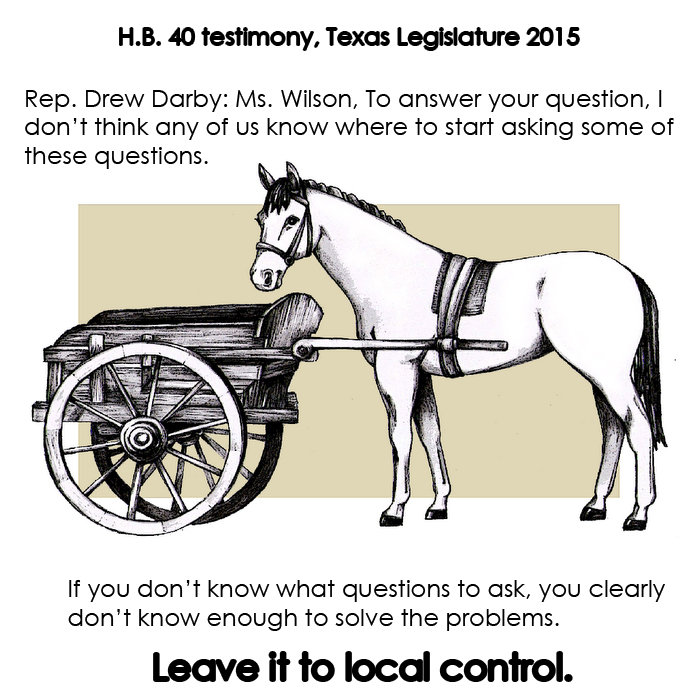 We are formulating our next steps. No matter what the formulation, there will be many, many more people taking these steps with us.

Update: GAH! I forgot to report that the companion bill to H.B. 40, S.B. 1165, passed the Senate committee on a unanimous vote. . These are the committee members. The senators who voted aye, voted to strip your rights to local control away and turn you over to the tender mercy of the Texas Railroad Commission.