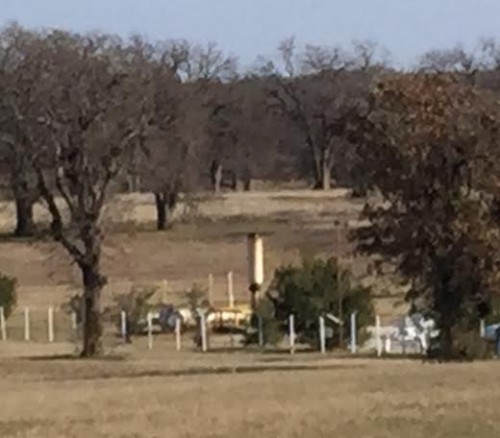 Yesterday, Flower Mound residents were reporting burning eyes, headaches, sore throats and bloody noses and, according to hearsay, one medical professional said these recent complaints were in record breaking numbers. So I decided to see what I could see with the FLIR GF 320 camera.

First I took video at the Hilliard Unit which is very close to two schools and is surrounded by very lovely homes. I couldn’t get close to this facility but was still able to pick up emissions.

Next was the infamous Bunn Unit. This is another facility that is way too close to a school and neighborhoods.

Next was the Sam Wilson facility on Scenic Dr. We saw the craziest thing here. From the piece of equipment in the photo below, that looks like some kind of incendiary device, we saw wet looking vapors shooting up about 15′ high. I got out of the vehicle as fast as I could but not fast enough to capture it on video. Whatever it was stank horribly and made my throat swell.

The Sam Wilson Unit and Compressor Station is another infamous facility that never fails to preform.

Previously from this facility:
“Catastrophic” emissions at Williams Barnett Shale facility in Flower Mound
This same facility had the huge methane plume when Piccaro did the Methane Mapping.

And then the Bob Smith. If I remember correctly, “Shiloh Chris” lives nearby.

And last, but not least, is the Cummings Unit, the site of frequent spills, that is tragically near a Montessori School

You might have thought that Flower Mound’s fracking problems were all over because of their 1500′ setback. No so, apparently.

Update: Let me add that I am a certified Optical Gas Imaging Thermographer. I have the same certification the TCEQ and industry has and I was certified by the same instructor who certifies them.  So I always get a kick out of it when good-old-boys say the FLIR GF 320 camera is only picking up heat.

This was sent to me via text. It’s probably from the Flower Mound Cares Facebook page <-shudder->. The FLIR GF 320 camera does detect heat but it does not detect hot air as THIS VIDEO shows. The plume that you see trailing off in the videos is VOCs. 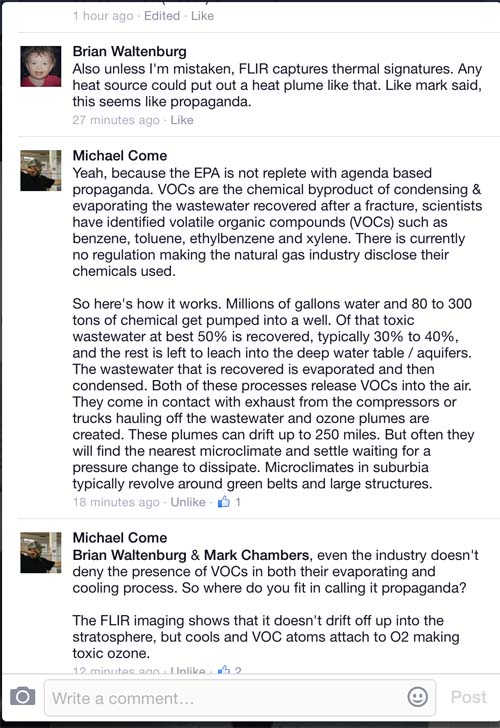 And just to be clear: The spurting fountain of likely toxic air pollution is a concern but the ongoing emissions from the compressor station and lift compressors are, IMO, a larger concern.