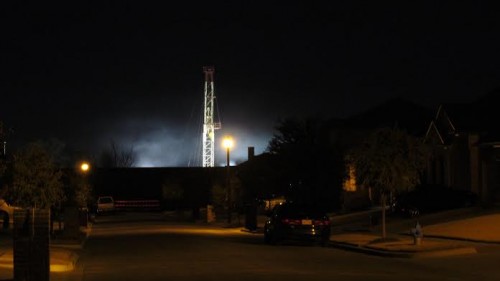 EagleRidge started fracking in a Denton neighborhood on Friday but stopped yesterday. Now there is a workover rig up at the site. Something went wrong but, of course, no one is informing the public.

EagleRidge is known for having problems during drilling, fracking and completion. Besides drilling, EagleRidge also sucks at public relations. A few of the highlights:

Who are the real terrorists?

UPDATE: Residents are getting no answers for the city or from Mark Grawe at EagleRidge. It was reported that Grawe was rude and seems upset.

UPDATE: Another Denton resident said, “They are pulling pipe fast and furiously.”

This shows that they are pulling pipe. No one seems to know why they would have all that expensive fracking equipment sitting idly by while they pull pipe.