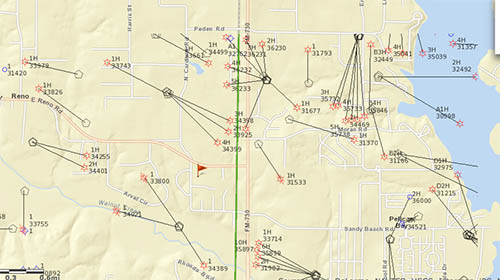 This morning I had email.

We had a 2.6 earthquake in Azle Tx on Eagle Mountain Lake where they are Fracking less than 2 blocks away. They say you shouldn’t feel it but my bed jerked and hit the wall and I was awake and my spouse awoke from his sleep. The neighbors felt it because when I walked outside they were all standing outside. What can be done to stop this? I have a  400,000. House on the lake that is fairly new and I do not want it destroyed.

Here is the Event Page on USGS. If you felt the quake, please report it on that page. When people don’t report, it allows scientists and the government to continue saying the quake was so small it was not felt on the surface. Check your homes thoroughly for damage and document the condition of your walls and foundation regularly. Homes 2 blocks away from fracking can sustain damage just from the seismic activity caused during fracking. The foundation in a Denton home cracked from vibrations during drilling.

Looking on the Texas Railroad Commission GIS map, I found quite a lot of horizontal wells in the area of the quake but did not find any injection wells. Here are screen shots of the map. The flag pin shows the epicenter. 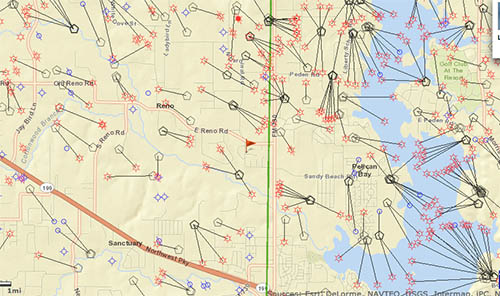 Fracking, fracking waste disposal and CO2 injection all require putting material into the ground–injection! It also requires taking material out of the ground which causes another kind of earthquake, subsidence, or sinkholes. Earthquakes in the Eagle Ford Shale have been blamed on removal of material from the ground.

I was recently interviewed by Univision TV (watch segment here). The reporter asked me the same question the emailer asked: What can be done…?

I have never heard of solar panels or wind turbines causing earthquakes. They do not contaminate the air and expose residents to cancer causing hazardous air pollution. There are some environmental impacts during manufacturing but those are one-time impacts. My solar panels will sit on my roof producing energy for 20+ years and they are saving me money. A recent poll from UT found that 86% of Americans want renewable energy. Lack of political will is the only reason we are not converting to renewable energy. The only reason we don’t have political will is because the oil & gas industry injects billions into our political system.

The solution put forth recently was for people in fracking zones to purchase earthquake insurance. So, again, I ask: Who profits and who pays from this shale gas boom.

UPDATE: Another quake just happened on the opposite side of Eagle Mountain Lake. Event Page.

And another one! That’s three in one day. Event Page.

And yet another earthquake in the same general area. Event Page

There have now been  7 earthquakes in the same general area.

There have been over 200 earthquakes in Oklahoma since 2009 with a magnitude over 3.0. The big one, 5.6M, was blamed on an injection well where fracking waste is disposed.

in 2011, a USGS study determined several minor earthquakes in Oklahoma to be the likely result of hydraulic fracturing (fracking), which uses pressurized fluid injection to create small underground fractures to release oil or gas. Source

The Feds have warned residents in Oklahoma that the risk of earthquakes is much greater “possibly because of oil and gas drilling-related activities.”

“They’re more at risk than they were four years ago,” said seismologist Bill Leith of the U.S. Geological Survey. “These don’t look like normal earthquake sequences.”

The picture for Oklahoma residents who want to keep the foundations of their home intact is not looking good because according to Reuters, the next big “shale revolution” will happen in their backyards.