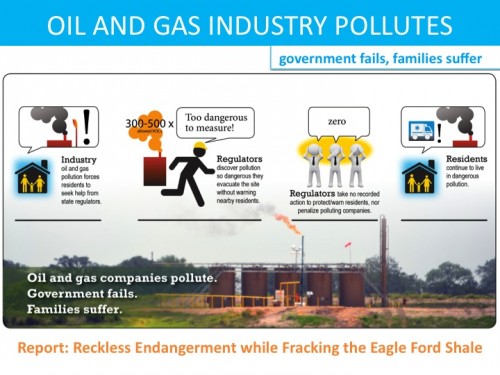 First, let’s be clear about what is in our report: Reckless Endangerment while Fracking the Eagle Ford Shale. The TCEQ found air pollution so dangerous that they hauled ass outta there without warning the residents. And they did this not once but TWICE. Also, the emissions were not and are not a one-time event as the TCEQ would have you believe.

Alan Septoff of Earthworks responded to TCEQ and to Energy In Depth’s response to our report. I was hoping that you could read his response made as a comment on EID’s website. But, as per usual, they would not allow his comment.

Here is our response:

Rather than respond on the substance, EID chose to attack Earthworks.

To paraphrase Isaac Asimov, ad hominem attacks are the last refuge of those without a leg to stand on.

The central revelations of the report are not in dispute:

TCEQ had the chance to dispute them, but did not and could not because the facts are drawn from TCEQ’s own records.

This is what it looks like to live with fracking and shale oil and gas development in Texas: