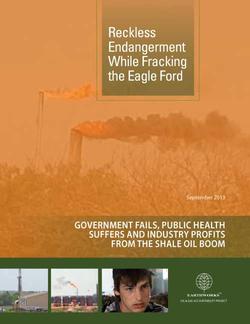 Washington, DC – A new report released today, September 19th, provides an important window into a disturbing national pattern regarding the oversight of fracking-enabled oil and gas development: regulators, charged with protecting the public, are actively avoiding evidence that fracking is harming the public. The report focuses on Karnes County, TX in an attempt to illuminate a growing national pattern of absentee regulators.

“This isn’t living anymore. It’s just existing, and wondering what you are going to breathe in next,” said impacted Eagle Ford Shale resident Mike Cerny in his interview with the report author.

From the report SUMMARY (7 pages)
In an unprecedented investigation of oil and gas operations and government oversight in Texas’s Eagle Ford Shale, Earthworks reports a toxic mix of irresponsible industry operators, negligent regulators, and the families who suffer the consequences. Specifically, Reckless Endangerment while Fracking the Eagle Ford, reveals:

Oil and gas operations in shale formations release chemicals to air, water, and soil that are hazardous to human health.

TCEQ Responds: (links provided by me)

In a statement, TCEQ said it had collected “several millions of data points for volatile organic compounds” in the Barnett and Eagle Ford Shale plays. ”Overall, the monitoring data provide evidence that shale play activity does not significantly impact air quality or pose a threat to human health.”

TCEQ criticized Earthworks’ account as incomplete. “[T]heir report does not point out that Marathon personnel were contacted and made aware of the [TCEQ] team’s findings” and the leaking valve was fixed the same day, an agency statement said. TCEQ did not address why its inspectors apparently did not notify nearby residents or take canister samples.

Note: Video taken at the Marathon Sugarhorn facility shows an ongoing pattern of emissions from June 2012 through March 2013. This is clearly not a one-time event or a minor problem.

That TCEQ apparently thinks “but we told the polluter about the problem” is an adequate regulatory response tells you all you need to know about how they prioritize Texans’ health vs oil industry profits.

Texas is sadly accustomed to being taken to the woodshed regarding indifference to oil and gas production’s environmental and health impacts. But this problem isn’t unique to Texas. Across the country, the US EPA is ignoring its own data about fracking’s health impacts, too. It’s no wonder communities across the country are passing ballot initiatives banning fracking-enabled oil and gas development.