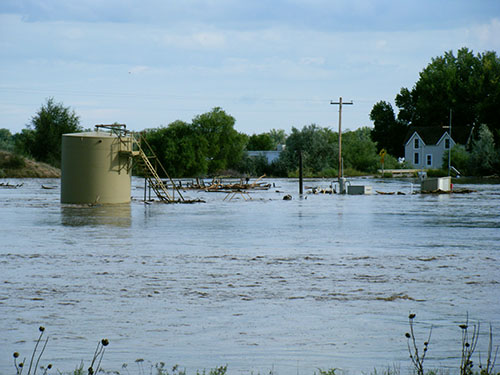 Please sign this PETITION to enact an immediate moratorium on fracking in Colorado.

Please see my previous post: Is there a media blackout on the fracking flood disaster in Colorado?  Note comments.

Let’s get something straight: This is a blog that focuses solely on oil and gas issues. I don’t blog about sewage or machine shop chemicals. I blog about the oil & gas mafia and have done so for many years. I realize there is a tremendous human tragedy happening in Colorado right now and that is horrible and heartbreaking. This is a part of that tragedy. If you want to start a blog and write about sewage and helicopter rescues or any other issue you can get a free blog at blogger.com. To industry and their apologists: Feel free to continue making an ass of yourself in the comments.

Below is an email from a a resident of Boulder County, another major flood area in Colorado.  Boulder County abuts Weld County. I remind you that Trish Schuller was the master of ceremony at the industry Psyops Conference I attended. Also let me remind you that Earthworks did a year long analysis of regulation in six states. Colorado is failing miserably.

The Denver Post finally got its head out of its ass and published an article today.

It’s taken 5 days. Tisha Schuller, quoted in the article saying there are “thousands” of flooded wells, is the president of the Colorado Oil & Gas Association (COGA), the industry’s lobbying group here in Colorado. If you read the article, she’s asking that activist photo takers (who stood on broken highways and in flood waters where you can’t tell where the heck you are in all the flood waters) tell her the locations of the damaged wells! I’m dumbfounded. The drillers and lobbyists don’t know where their flooded wells are? Anadarko and Encana can’t hire a plane and fly over their own damn wells to assess the damage? They have no data transmissions indicating problems with a well?

More on COGA
There are 5 Colorado front-range communities that got fracking bans or moratoriums on their November ballots, 4 of them after extensive petition drives. (The local amendments and ordinances specify bans or moratoriums within each community’s city limits.) COGA has hired and paid for attorneys to harass several of the communities by filing protests to their petitions—our community, Lafayette, was one targeted (unsuccessfully) by COGA’s army of retained law firms. Loveland is in a court battle financed by COGA so its moratorium is stalled. COGA also sued Longmont, a community north of us that was damaged by the flood, when Longmont passed a fracking ban last year after a successful petition drive. Longmont has also been sued by the state of Colorado—the damn taxpayers! It’s hard to believe. And Longmont also banned fracking within its city limits! COGA has plenty of money for attorneys to harass local Colorado communities; take some of that money and hire a plane—look at the damage yourself!

The Colorado Oil & Gas Conservation Commission headed by Matt Lepore, also mentioned in the article, is the state agency that has a dual purpose in regard to oil and gas extraction; ostensibly protect the public and environment AND encourage oil and gas drilling in Colorado. Guess which wins. COGCC has 17 inspectors dealing with 50,000 wells in the state of Colorado.

This can only get worse and worse.

Gasline rupture in near Greely.

Photos from Greely/Evans. There are 697 wells in Greeley and over 20,000 in Weld county to date and growing. 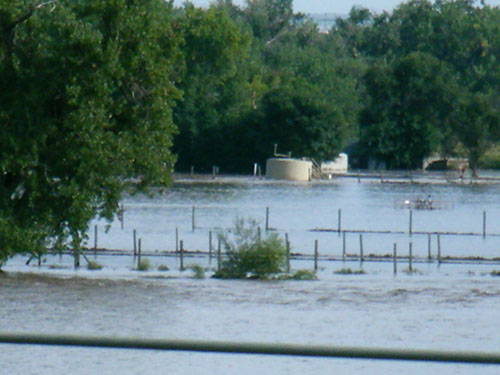 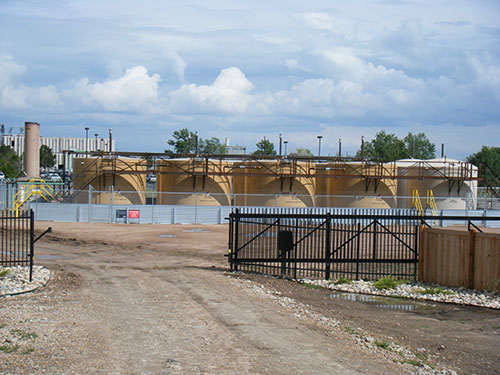 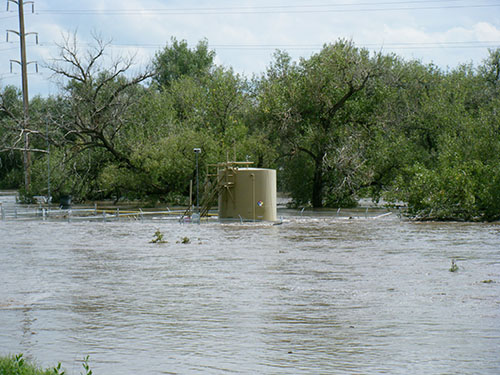 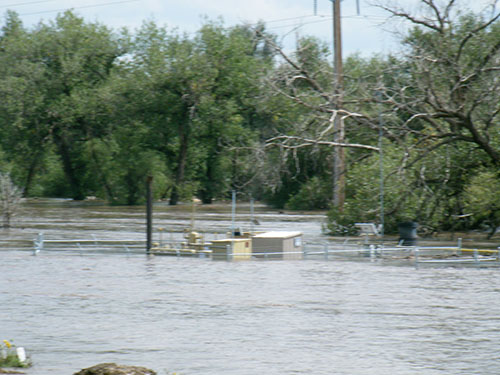 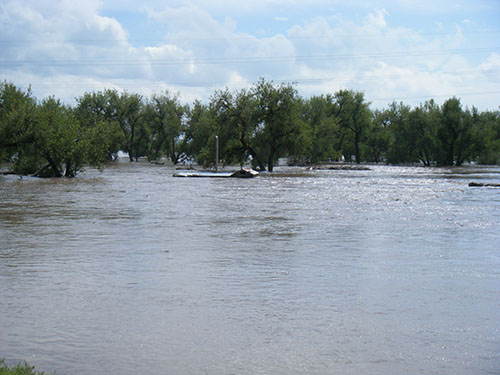 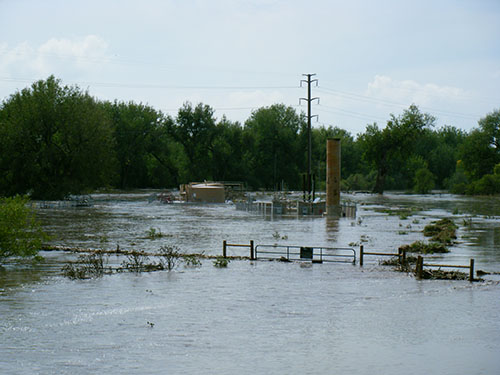 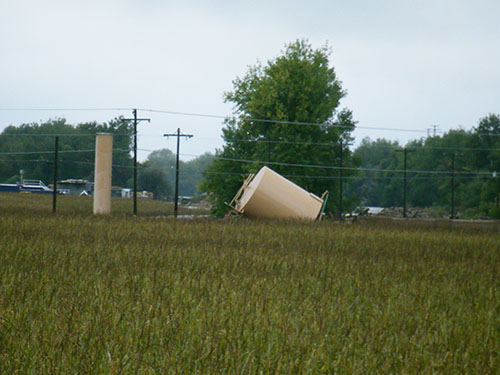 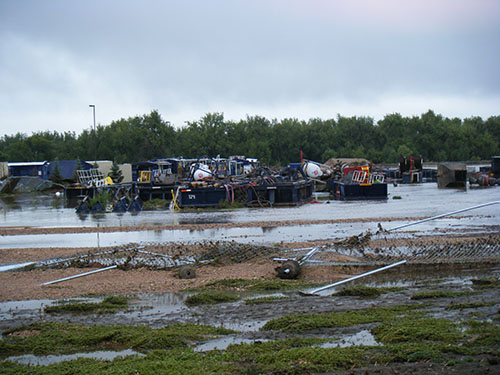 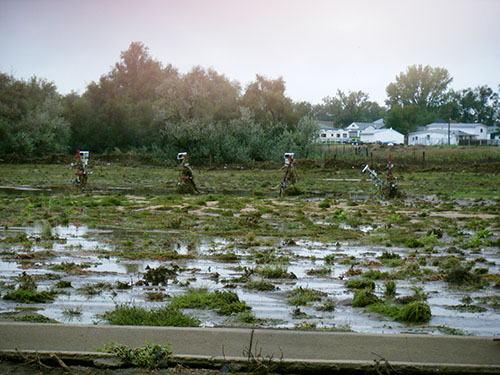 The water is receding which should allow well owners to get into impacted wells. This is important because wells under water have combustors (the devices used to burn off waste gases) that are under water and thus “out” thus allowing un-combusted waste gases to escape into the atmosphere as raw natural gas. Raw natural gas is poisonous, odorless, colorless and seeks out low areas, in this case it will follow the course of the river.

The combustor is the big black pipe in the left of the picture. 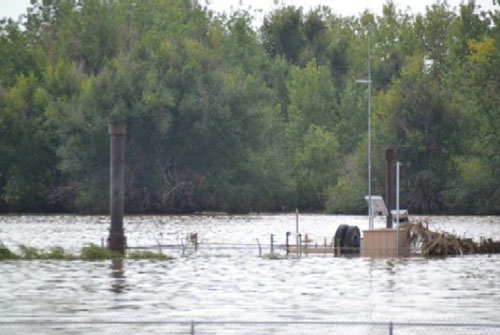 The other problem is escape of oil products. Below is a picture of a condensate tank that should be hooked by a pipe to the wellhead above which captures produced toxic fluids.

It is no longer connected and can leak into the Platte river where it’s floating right now. Oh and here we see also how close these wells are to residential areas, those are homes behind the tank, thankfully evacuated. 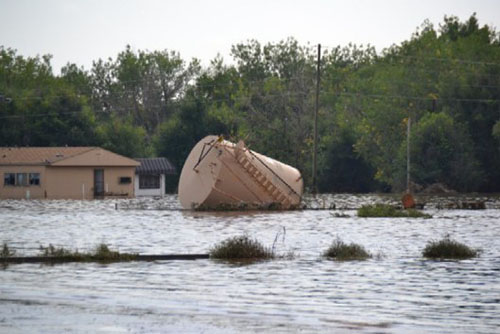 Notice the water level line on the [Baker Hughes] building. The far side of the building (still in water) is where the dock doors (loading and unloading) are located. Right behind this building is where the well and tank in the previous pictures are located. These pictures were taken on Saturday in Evans in the 4600 block of Brantner Rd. And you can use any of them you wish. 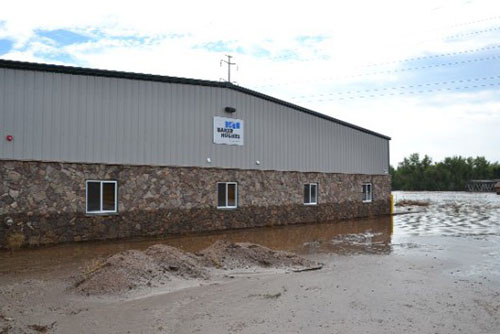 Here is a shot of the wells across the street (11th Ave.) from Island Grove park, it’s right next to the Poudre river. The problem here is the water from the river has flooded the secondary containment berm. 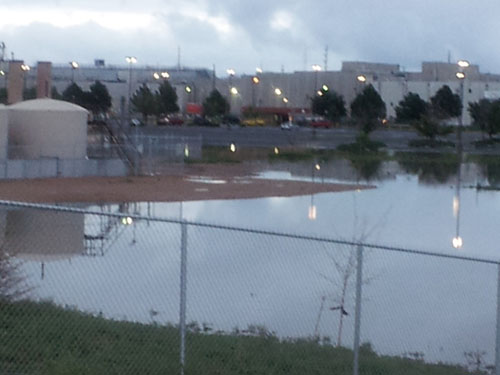 UPDATE: This is an excellent video that highlights how lame COGA is.