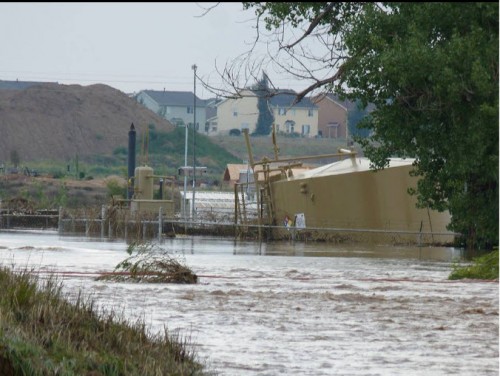 Please sign this PETITION to enact an immediate moratorium on fracking in Colorado.

LOOK —> Please go see this new, post with shocking photos, video and a message for residents in the middle of the fracking flood zone.

I will update this post as residents send me pictures and video.

This picture taken by a resident is from yesterday.

I see you’ve noticed the underwater wells in Weld County, Colorado. Amazing; we’ve emailed the Denver TV stations, other media, and state and local politicians. We’ve sent pictures that our members have taken. It’s like the media and politicians have been TOLD not to say anything about it. There has been no mention of the gas wells on the Denver newscasts either last night or this evening although all stations have had extensive and extended flood coverage. You can see underwater wells in the background of some of the newscast videos, and yet the reporters say absolutely nothing.

Here’s a picture one of our members took yesterday in Weld County, Colorado. We’ve got tons more on our website. Check it out. The tanks are tipping and, in some cases, have fallen over. They have to be leaking toxins into the flood waters. There have to be hundreds if not thousands of underwater well pads in Weld County as a result of the flooding.

Please publicize this in Texas since our media people and politicians have gone silent!

Post from yesterday shows leaking tank floating down the river. 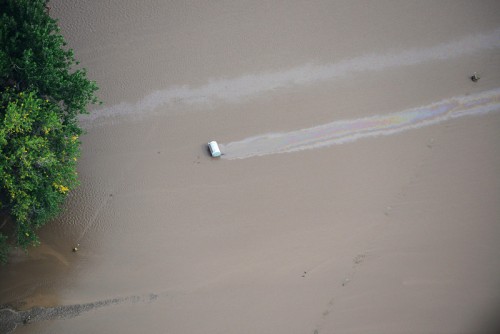 UPDATE: The locals are very busy right now taking calls from the media. So far no calls from the local media though. Last I heard it is continuing to rain.

They reported to EPA emergency under report number 1060249.

UPDATE: You can see more photos HERE. Another tank overturned and a fracking chemical warehouse that was flooded. I did not take the photos.

UPDATE: From the Daily Camera:

Regulators say they agree these well sites could pose a contamination risk, and they will get out to assess the damage as soon as it’s feasible.

Lafayette-based anti-fracking activist Cliff Willmeng said he spent two days “zig-zagging” across Weld and Boulder counties documenting flooded drilling sites, mostly along the drainageway of the St. Vrain River. He observed “hundreds” of wells that were inundated. He also saw many condensate tanks that hold waste material from fracking at odd angles or even overturned.

“It’s clear that the density of the oil and gas activity there did not respect where the water would go,” Willmeng said. “What we immediately need to know is what is leaking and we need a full detailed report of what that is. This is washing across agricultural land and into the waterways. Now we have to discuss what type of exposure the human population is going to have to suffer through.”

A spokesman for the Colorado Oil and Gas Conservation Commission said the agency is aware of the potential for contamination from flooded drilling sites, but there simply is no way to get to those sites while flooding is ongoing and while resources are concentrated on saving lives.

Apparently all sides agree that there is a contamination risk. So I hope the industry apologists will, at least, stop using my bandwidth trying to convince us otherwise.

Edit: I couldn’t do it. As far as I know I have allowed all the comments even those calling me names but they are coming in very fast and I do have other things to do. Please keep your comment clean because there are children who read this blog. I don’t think the industry is doing itself any favors here in the comments.

But here’s the deal, people: I pay for this bandwidth and I spent most of my day yesterday allowing your crazy comments. Enough is enough. I’m not wasting my bandwidth for you to place, essentially the same comments over and over.

UPDATE: From an email:

There are several members of the Vermont Governor’s administration flying to Colorado as we speak to help in the rebuilding of infrasturcture after flooding as we had to do after Irene.  Being a mountainous state as Colorado is and being a victim of severe and isolating flooding as Colorado is, the Colorado Governor requested our help.  If the Colorado people ask for their help in ENVIRONMENTAL ISSUES, perhaps they might have better luck with people from one of the most ENVIRONMENTALLY SAFE STATES in the country.  Hopefully, they will not shy away also from the issue because of money, politics and fear

To circle back, activists here have been contacted by Bloomberg, the Weather Channel, NPR, the BBC and Al Jazeera….so far.  Thanks so much for your help.  The pictures are all over the web and getting picked up by all sorts of media, and we’re being contacted by more and more people.

I think the local CBS affiliate in Denver finally did some filming this morning with one of our members—very late to the party.  Others have totally avoided the issue like they’ve been told not to report on it.  Meanwhile, more and more pictures are coming in of damaged well pads and floating tanks