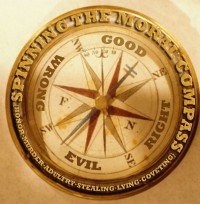 When the movie ended, credits rolled but no one moved or said a word. That doesn’t often happen in a fairly crowded movie theater. Processing was required.

Promised Land was much better than I expected. We knew there was a plot twist coming but we were unprepared for the creepiness–picture George Clooney on a hill petting some horses when his car blows up creepy, and that’s not creepy enough. As I sat there watching the credits roll, I thought, “Yeah, they would totally do that.”

Most regular people can’t calibrate their moral compass low enough to comprehend how sinister the fracking mafia truly is.

Chip Northrup was, apparently, at the same showing with me and about 25 other people that I know. His review is on the ShaleShock blog.

Great casting, witty, insightful dialogue and a Double McGuffin that I did not see coming, but that was convincing in that it grew out of the plot and was creepily plausible – if you understand the industry’s dirty tricks and realize that they use gas roots operatives posing as locals. . . and vice versa . . .

Big money and huge effort has been invested to discredit this movie just like they did with the documentary Gasland. The fracking mafia has created a new strain of Fracking Joe Camels and Fracking Pushers solely for Promised Land. But Dory uncovered the new players and connected the dots right back to the fracking mafia.

They rolled out a new website called The Real Promised Land and a new Facebook page by the same name. I’ve been banned from commenting on the Facebook page along with MANY others. We were banned for posting news stories and videos–the truth about life near fracking.

A new report by Checks and Balances Project found that fracking’s Joe Camel, aka Energy In Depth, has been ”secretly influencing the media and the public on energy issues by moving pro-fossil fuel messaging.” There is no excuse for creating false balance or using fake experts. A real journalist provided this list of resources for journalists who report on fracking. Now, PR Watch has a reporters guide to reporting on Energy In Depth aka Fracking Joe Camel.

Now I understand why the huge investment in discrediting Promised Land. Movies that make people think are dangerous.

This movie is not about the environmental devastation caused by fracking. It’s about the predatory practices used by industry to gain access to our backyards and how communities loose their way in gasland and are torn apart. 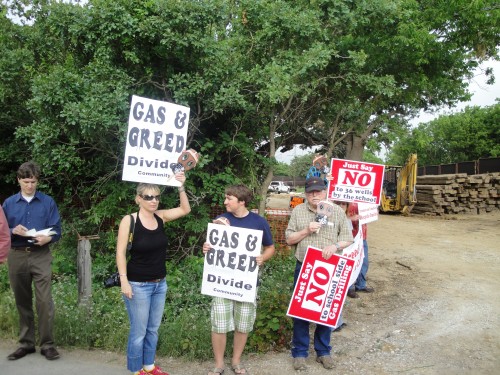 I wasn’t expecting the emotional roller coaster  At first I had pride that the movie was fairly accurate. A little boredom crept in at one point. Then my blood boiled so hot I thought it would blow out my ears and it all drained out in the next moment leaving me with my mouth gapping open.

UPDATE: I forgot to link to one of my landman stories. Also, see the comments for a perfect example of fracking Joe Camel deception.

Why sitting still and quiet to think is dangerous to fracking.

We march collectively toward self-annihilation. Corporate capitalism, if left unchecked, will kill us. Yet we refuse, because we cannot think and no longer listen to those who do think, to see what is about to happen to us.