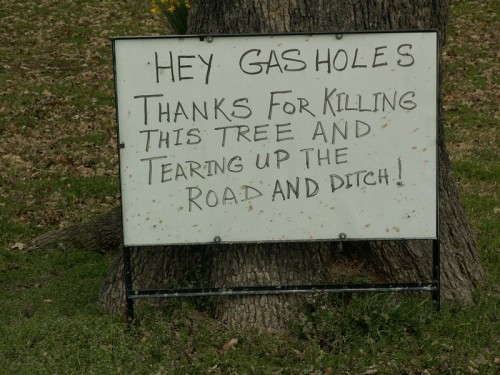 Today I was looking for a picture to tweet on Twitter and I ran across this oldie but goodie sent to me by a reader in Johnson County. I posted it a long time ago.

The term “gasholes” came up in my deposition last Monday as it did in my hearing. (They hate that term.) I wish I could take credit for it, but I’m not that clever. There is a documentary by that name and a website and a Facebook page and a band and … it’s endless.

Interestingly the sign was made by a conservative Republican who was a “Drill, Baby Drill” kind of guy until he actually learned what that meant. He sent me emails with a tag line: “Don’t blame me. I voted for the hero and the hottie.” After he experienced drilling near him, he decided he liked solar and wind much better than constant trucks, noise, toxic fumes, flares and the gunk they sprayed on his neighbor’s field that ran off onto his.

That’s how the opposition grows–one frack at a time–and how I have become friends and found common ground with people from all different view points.