Yesterday, I attended a court hearing in Parker County where Range Resources is trying to compel me to comply with their subpoena in a case to which I am not a party and with their over-the-top request for correspondence. 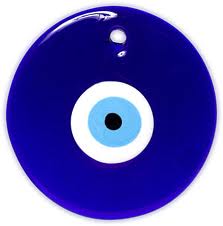 ON THEIR SIDE: They had six or seven attorneys, one of whom, Andy Sims, gave me the most elaborate, lingering evil eye I have ever received in the doorway outside the courtroom. I’m guessing that was part of their arsenal of intimidation. They also had several  assistants in tow.

ON MY SIDE: J. Scott McLain and me.

Who says the average (wo)man doesn’t have equal access to the courts?

They had a 3 or 4 (you know how woman are with depth perception) inch binder full of stuff from my blog and a Powerpoint presentation. In the presentation is a diagram that is supposed to show how I conspired with several other people to defame Range in the Lipsky case. 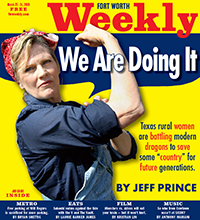 The most entertaining moment from the presentation was  this picture of me taken by Jeff Prince for the FW Weekly.

“Here she is Judge with a militant, upraised fist,” Simms boomed with great theatrical flare.

The judge commented that it was a familiar pose. “Isn’t that Rosie the Riveter from WWI?” he asked.

I never got a copy of that presentation but I would certainly like one. The leaps taken in it are worthy of a gold medal.

Although Range Resources SR VP and General Council said in a letter to Calvin Tillman, “…Range does not seek a deposition based on Ms. Wilson’s writing on her blog,” the questions they asked where almost entirely about writings on my blog. It is clear they are after me for my blog and likely retaliating against me for breaking the PSYOP story. (More about the letter to Calvin Tillman from David Poole HERE)

The most shocking moment was when they asked how much child support I receive. They were trying to establish my income but child support is not considered income. The objection was overruled. As their goons were combing through every single blog post I have ever written and every comment I have ever made on the internet, I guess they missed this post: Look at the face of the working poor. I wrote that before the drilling started very near us and before my property value plummeted. While it is true that using the “pull yourself up by the bootstraps” determination my conservative Republican single mother gave me, I have–only very recently–improved our situation, I started from a deep hole where we lived for three years with no heat and no AC. It was a long climb up.

The most amazing thing about yesterday was the investment Range Resources has in Sharon Wilson. If you add it all up…

I can’t help but wonder how much goodwill might have been created in communities by using that money for vapor recovery units or pneumatic valves. Investing in trying to involve me in a conspiracy case where no evidence exists to support that is not a wise investment. You can read the elaborate fairy tale they have constructed in their motion to compel (link fixed) and the appendix that came with it.

Here is a cartoon for your enjoyment. 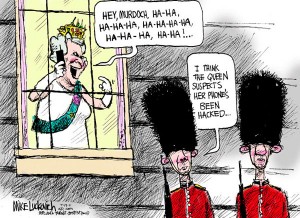