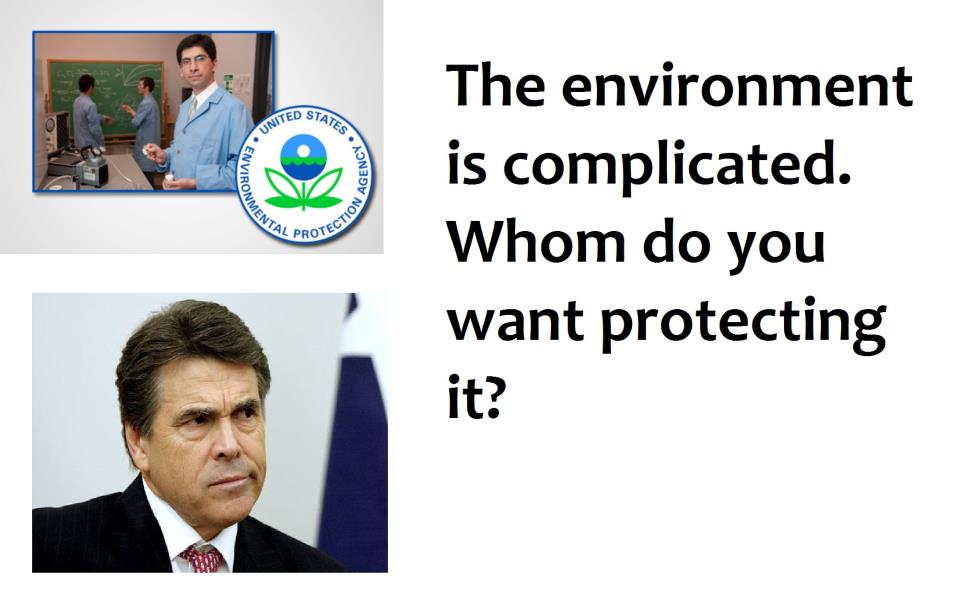 UPDATE: Letters supporting Dr. Armendariz are urgently needed. Do not delay. Do not leave it to someone else. Or you might end up with Mike Knapp, The Landman, (see comments) for your next Region 6 EPA Administrator.

Media Matters corrects the right wing spin machine reporting.  They weren’t there and they forgot Journalism 101.

I wonder why no one is talking to the people who were actually there in Dish, TX. That might give some perspective. IJS

Industry and the GOP is on a witch hunt and they are after Obama and the EPA. Their first target is Dr. Al Armendariz, EPA Region 6 Administrator because he had the audacity to step in to protect public safety and demand accountability. Their whole campaign focuses on a comment made by Armendariz at a community meeting in Dish, Texas where state testing showed high levels of drilling chemicals in residents’ blood and urine.

The crucifixion comment actually applies more aptly to citizens in areas of shale oil and gas extraction. Way before the shamefully few violations are ever issued, industry invades our communities with their insurgency manual and their PSYOPS operatives and crucifies any opposition to their activities hoping to bludgeon the remaining citizenry into submission. Everyone left standing gets inoculated.

This crucifixion of the citizenry is something I have personally experienced and something I expose on this website.

Yesterday Senator Inhofe, who has received millions from the oil & gas industry, stood on the Senate floor and blasted Obama, EPA, Dr. Armendariz and a “rabid anti-fracking” Texan with enough gasses to heat all the homes in Dallas next winter.

The shale oil & gas fracking victims in EPA Region 6 stand by Armendariz and the Obama EPA!  We cry out to you for help for you are our only hope!

UPDATE: The TCEQ has the audacity to comment about cheapening the role of regulators. That’s rich. The TCEQ isn’t worth $.02 when it comes to regulation.

The Obama administration defended its regulation of the oil and gas industry today in the wake of disclosures that a U.S. EPA official used the term “crucify” when explaining how he can “make an example” of environmental lawbreakers.

“The individual here apologized and made clear those comments are an inaccurate way to characterize what EPA does,” White House spokesman Jay Carney said in today’s White House briefing in response to questions from Fox News correspondent Ed Henry.

The situation stems from video of a 2010 town hall meeting in Texas in which Dallas-based EPA Regional Administrator Al Armendariz compared his enforcement philosophy to ancient Romans crucifying villagers in towns they’d overrun (E&ENews PM, April 25). He used it as an analogy for employing scarce enforcement resources by being particularly aggressive with certain lawbreakers to deter others.

“They’d find the first five guys they saw and they would crucify them,” said Armendariz, who oversees a six-state region that includes Oklahoma and Texas. “And then you know that town was really easy to manage for the next few years. And so you make examples out of people who are in this case not compliant with the law.”

The comments were brought to light by Sen. James Inhofe (R-Okla.), ranking Republican on the Senate Environment and Public Works Committee and one of the most outspoken supporters of the oil and gas industry in Congress.

Late yesterday, EPA officials released an apology from Armendariz and a statement that said the agency is committed to “strong, fair and effective” enforcement.