There was a spill on the drilling rig that is right outside the kitchen window of my friends, Christine and Tim who live on top of the Barnett Shale. 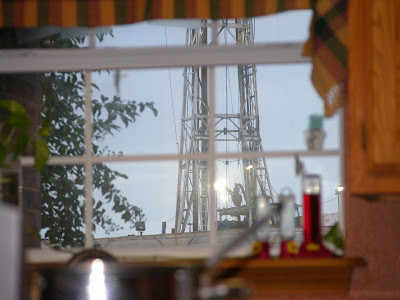 Today, Christine saw “black smokey looking liquid spewing out of a pipe on the side of the rig and shooting to the other side of the waste pit and spilling over.” And how did the workers react on the Aruba Petroleum drill site?

All the workers sprang into action, got the spill contained and immediately started clean-up to protect the environment.

Nope. That didn’t happen. Christine reported the spill to the Texas Railroad Commission. Here’s what did happen:

David [TRC] showed up on the site and judging from what they are doing now, he told them to clean it up. First one guy just started shoveling it over the fence until another guy did a head motion over to me on the porch video taping. Then they started shoveling it into buckets and putting it in the pit.

Yeah, I’ll have that video up soon.

The black smokey stuff was probably drilling mud hot from being down below. The smoke was probably gas/methane that contains VOCs and possibly some drilling chemicals, hydrocarbons and NORM. Christine said it smelled like rotten eggs which could be deadly H2S gas.

I was making lunch for my daughter. We were both in the kitchen and as I looked out the window I saw black smokey liquid shooting across the pit onto the ground and into our neighbors trees.

The spill occurred at approximately 11:50. That is when I started video taping. After it had stopped, I waited to see what would happen next.

Nothing was done. Two hours later, at 1:46, I called the TRRC and reported the spill.

Nothing was done until David from the TRCC showed up.

Even after he showed up, one Aruba Petroleum worker just started slinging the contaminated soil over the fence onto my neighbors property.

He stopped when they noticed me video taping.

To think that only a month and a half ago we were living a peaceful life, the American Dream.

It is amazing to me how quickly that dream can be shattered by greed.

Everything we worked so hard to build was destroyed in a day.

In case you ever wondered what might be in drilling mud: 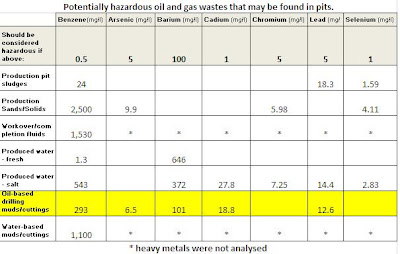 Don’t miss the comments on the previous posts about this site. There is a comment from someone in the industry and the homeowners respond.

Barnett Shale: In Your Backyard

Aruba Petroleum, Operations in the Barnett Shale – In your backyard

And the story continues…