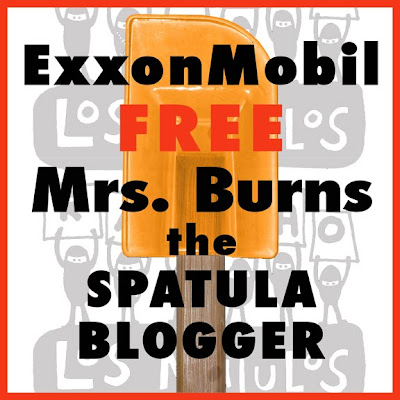 Elizabeth Burns, like me, is a reluctant activist forced into action by the horrendous environmental abuses she witnesses on her own ranch. Her videos have exposed reckless drilling practices by XOM that endanger human health and safety, harm wildlife and spoil air, soil and water. XOM has gagged Mrs. Burns claiming that she is revealing “trade secrets.”

Did this blogger expose an Exxon Mobil trade secret?

We have a blogger down in south Texas! Exxon Mobil (XOM) has slapped a gag order on her claiming she is revealing trade secrets. Apparently XOM doesn’t appreciate this blogger’s particular brand of Spatula Video Reporting. NOTE: this reporting is done from the ranch where she lives that has been in her husband’s family for decades.

I can see how XOM might not want everyone to know about THIS particular trade secret where they use a screw to stop slow down a benzene leak. Man! If other drillers find that out there might be a run on screws all across this whole country. Or even worse, if all the drillers find out they never have to replace any old, worn-out equipment–even old, leaky junk from 1949 that doesn’t meet requirements of federal environmental laws like the Clean Air Act–then all those equipment suppliers would go belly-up.

ExxonMobil has at least 60
burn pits on the McGill Ranch property.
They buried them.
I am digging them up!

See, that stuff leaches down into the groundwater and The Spatula Video Blogger got it tested. Now, I’m not saying there’s a cancer cluster down there or anything but I did hear that the cancer clinic is overwhelmed.

And yet another trade secret:

In her post today, you can see that her blogging and videos are effective. It’s something about dead birds, a drilling waste pit, game wardens and criminal charges. That’s a damn good job by a housewife with only a spatula to hold her microphone!

Other blogs calling for XOM to free Mrs. Burns, (so far):