A tiny amount of Frack fluid that was 99% fresh water and only 1% chemicals killed 17 healthy cows!

I’ve noted before that no more information was forthcoming about the 17 cattle that died when fracking fluid was spilled in their pasture. Today the Shreveport Times released an update on the situation that includes the failure of Chesapeake to report the incident for five hours while they clean-up the collected evidence and they never notified the sheriff’s department.

Spokesmen for Chesapeake Energy and their contractor hydraulic fracture giant Schlumberger would not answer The Times’ questions about the incident, 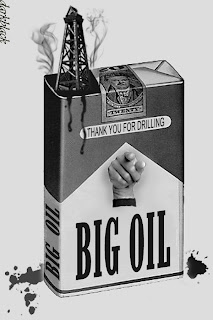 But please note that they “compensated the owner of the cattle.”

Do you remember that scene in Thank You for Smoking where the Marlborough Man who is dying of lung cancer receives a suitcase full of hush-money cash from the tobacco company?

The update includes a chronological timeline of the events from Chesapeake Energy official Steve Turk who admits that only a tiny amount of frack fluid is deadly.

Turk’s letter states:”During a routine well stimulation/formation fracturing operation by Schlumberger for Chesapeake, it was observed that a portion of mixed ‘frac’ fluids, composed of over 99 percent freshwater, leaked from vessels and/or piping onto the well pad.”

The spill was not reported, the missive states, because it was not a “reportable quantity” under state and federal regulations, but water and soil analysis found that some of the site contractor’s “products” mixed with storm water runoff and flowed into the field.

Only 1% of the frack fluid was chemicals and it was in such a small amount it was not even reportable. Yet it killed 17 healthy cows!!!! HOLY COW!

That’s some deadly sh*t and it needs to be regulated!

Take Action: Keep drilling toxics out of our drinking water