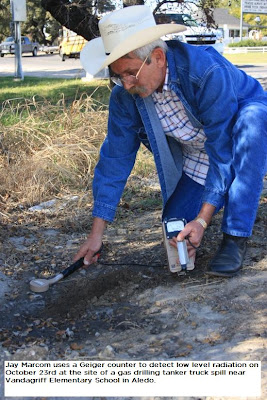 A tanker truck recently spilled produced water near an Elementary School in Aledo. Children walk through the spill every day.

The Texas Railroad Commission claims that radioactive particles in a school zone is no cause for concern because it’s not the ‘hot’ kind of radioactivity, and because the TRC is not concerned, it’s next to impossible to get the media interested.

The following article, written by Kathy Kathy Chruscielski of Parker Area Residents Committed to Halting Excessive Drilling PARCHED was never printed in the community newspaper because the TRC said there is no cause for concern. As a result, parents never received the warning that could protect their children.

A tanker truck spill in an Aledo school zone containing NORM is ‘below regulatory concern but shouldn’t parents be concerned?

The Texas Railroad Commission is investigating the site of a tanker truck spill near Vandagriff Elementary School that appears to be contaminated with Naturally Occurring Radioactive Material (NORM). Rancher Jay Marcom measured low level radiation at the site on October 23rd after a tip by an Aledo resident reporting dead trees and grass near the scene of a tanker truck accident. The operator, Texas Transco, was hauling water produced from gas drilling when the truck overturned on September 26th.

Mr. Marcom, who owns land in Parker County, purchased his own Geiger counter to test for radiation after his ranch in Stephens County was contaminated by a spill involving produced water from a gas drilling storage tank. Mr. Marcom believes that trucks carrying produced water should have warning labels to alert first responders to possible hazardous materials in gas drilling waste including NORM and BTEX (benzene, toluene, ethyl benzene and xylene).

According to Marcom, the real danger is not from the low level radiation, but from the radium molecules that bond with the chlorides in the water to form scale deposits. “The concern is if the powder becomes airborne and is inhaled, the radium would never leave your body. The half-life of radium is 1600 years.” The United States Environmental Protection Agency’s website describes radium as a potent human carcinogen.

The following are slides from Wilma Subra’s (1) presentation given in Fort Worth on October 20, 2008. 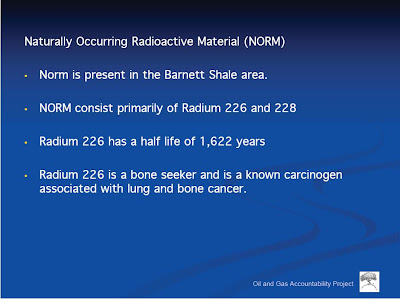 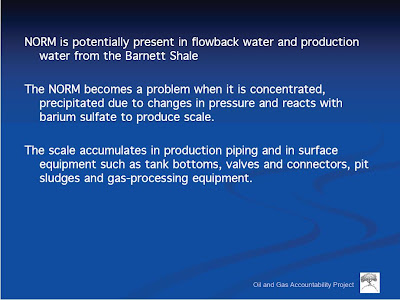 Leaking pipelines blamed for death of 300 trees in Brock.
A couple of weeks ago, Ralph Walker who lives in Brock and owns a nursery noticed that his trees were dying.

“I thought it was odd,” said Walker, who helps run Cole’s Plants, which has operated in the area for more than 50 years.”There were green trees and then trees with no leaves. I thought worms had started in on them.”

Then he drove into standing salt water at about the same time he saw dead fish near a dry stock tank.

A pipeline owned by XTO that carries drilling waste to an injection well was leaking.

There is also concern about water table contamination.

Saltwater disposal well near Aledo shut down over spills, leak

A saltwater disposal well near Aledo has been shut down after an inspection found natural gas drilling waste spilled on the ground and evidence of an underground leak. The Texas Railroad Commission said there’s no evidence of hazardous liquids in the ground spill, but a local clean-water activist pointed out that the disposal well is within a mile of a subdivision that gets its drinking water from a well.

“We keep hearing from the industry how safe they are, but here we’ve got a well — it’s less than 2 years old and it’s already got a leak,” said Kathy Chruscielski of Parker Area Residents Committed to Halting Excessive Drilling.

The well has been temporarily shut-in.

Committed to protecting the environment and the health and safety of citizens, Wilma Subra started Subra Company in 1981. Mrs. Subra provides technical assistance to citizens concerned with their environment by combining technical research and evaluation. Through this work, Mrs. Subra addresses a host of environmental and human health issues associated with hazardous waste, solid waste, oil field drilling, production and waste, air pollution and surface water and ground water pollution. This information is then presented to community members so that strategies may be developed to address their local issues. The community needs that are identified from this local involvement are then translated into policy changes at the State and Federal level through Ms. Subra’s service on multi-stake holder committees.

Mrs. Subra holds degrees in Microbiology/Chemistry from the University of Southwestern Louisiana. She received the MacArthur Fellowship “Genius” Award from the MacArthur Foundation for helping ordinary citizens understand, cope with and combat environmental issues in their communities and was one of three finalist in the Environmental Category of the 2004 Volvo for Life Award.

Subra Company, Inc.
Subra Company is a chemistry lab and environmental consulting firm in New Iberia, Louisiana. Subra Company provides technical, research and evaluation services to citizens and communities in the U.S and abroad who are concerned with their local environment.