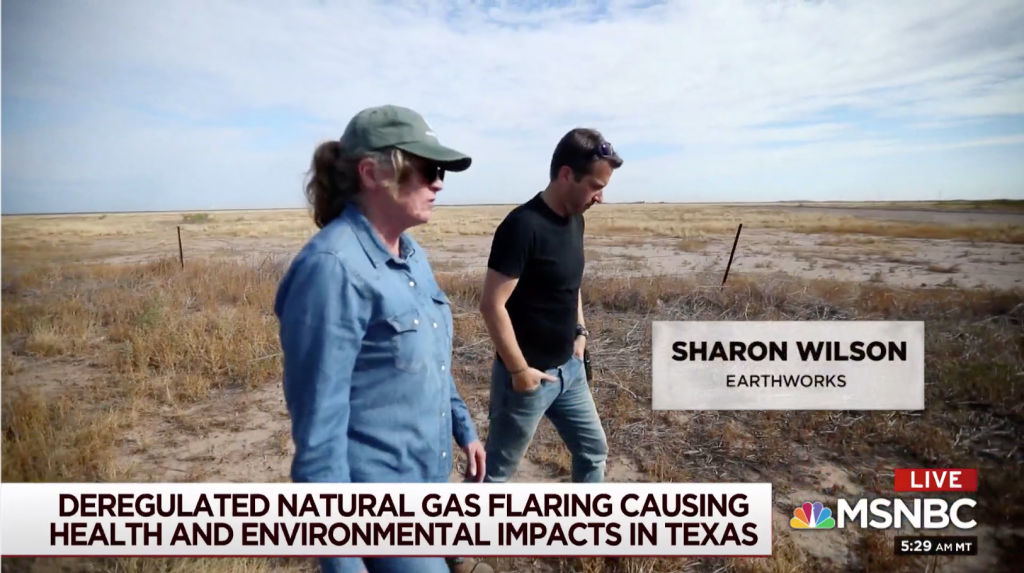 It’s not every day that a country gal ends up on MSNBC, Morning Joe, Ali Velshi, and Lawrence O’Donnell all on the same day while out in the Texas fracking zone.

Cal Perry and his team braved 110° West Texas heat to tell the story of out of control oil and gas extraction in the Permian Basin. I’ve been in front of a camera plenty of times before, but this was a next level professional team that wants to get the story right while having a little fun.

At around 10:30am, we found the unlit flare in Cal’s report. When a flare is not lit, it vents raw methane and hydrocarbon gas instead of burning it. Lauren Pagel, Earthworks’ Policy Director, whipped out her phone and got this video.

One of three unlit #oilandgas flares within one mile. Taken with an iPhone held up to the LCD screen on a FLIR GF 320 optical gas imaging camera. #methane is 86 X more potent at warming our planet than CO2. We must stop the #fracking expansion. pic.twitter.com/UCpuNRyZJv

What the MSNBC Story Did Not Tell You.

Lauren and I went back at around 5:30 pm that same day, and the flare was still unlit, so we recorded another video.

And the next day, 30-hours later here it is, still blasting methane and volatile organic compounds into the air.

Today, every site with tank emissions, many with unlit flares.

There is no telling if or when they ever got the damn thing lit.

In case you need a reminder of why it is criminal for operators to be so neglegant, read this:

The Global Warming Potential of Methane is Damn Important.