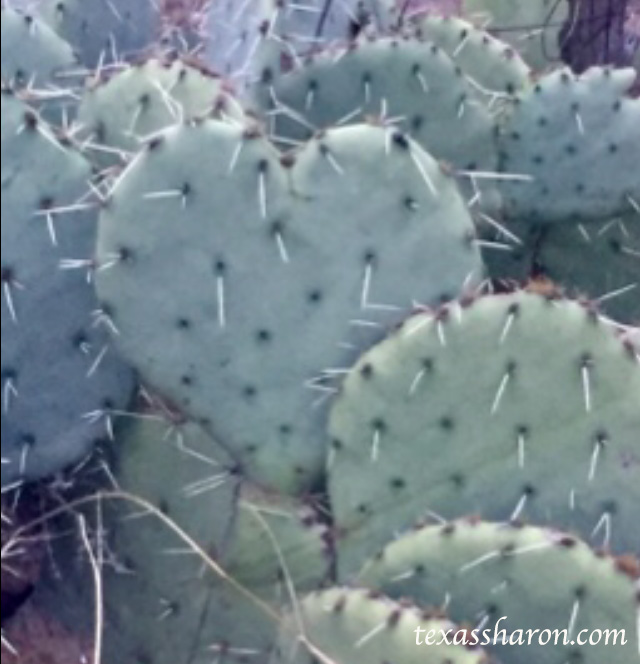 Caught in a bizarre Beto Twitter fight, I dug in, learned plenty, and decided to blog again after a near two-year absence.

I updated this post below to add more information about Beto’s voting record.

It all started with a tweet from David Sirota. 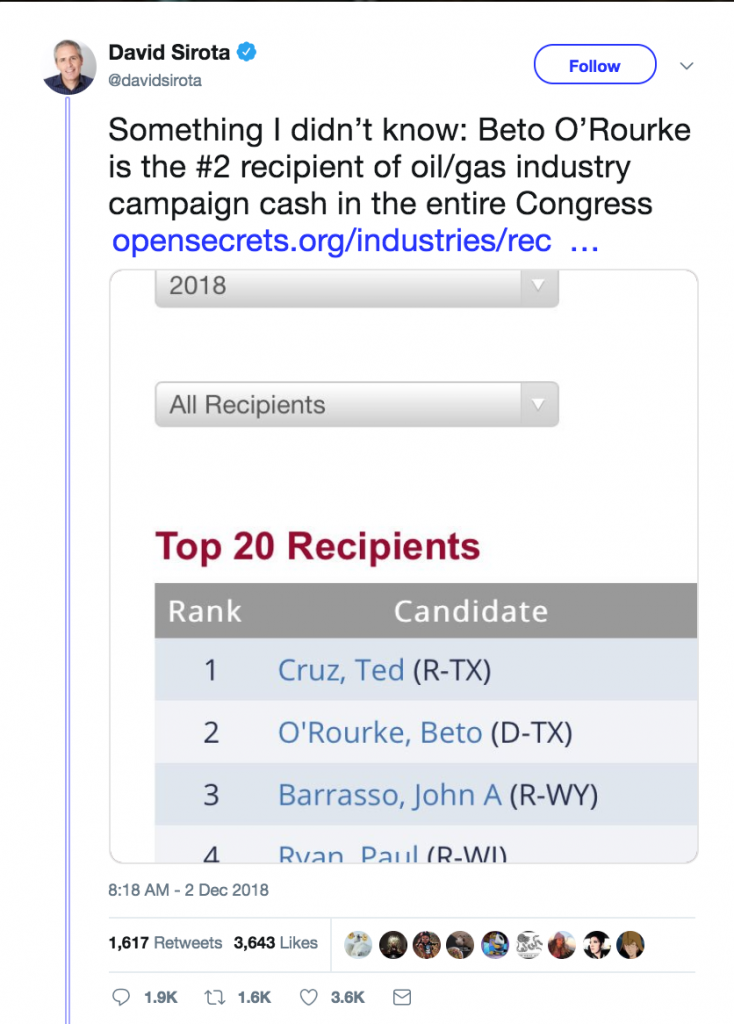 Whoa! That was a shocker and puzzling since Beto made much of his no PACs and small donor funded campaign. I decided to see for myself and ended up on OpenSecrets where I saw this:

Could that much money have come from small individual donations from oil and gas employees? Clicking around I found that nearly 60% came from “large” donations. (A deeper analysis found 75% of the oil and gas donations were in amounts over $200, some way over.) I retweeted Sirota’s tweet.

And that’s when all hell broke loose. Suddenly, I was being called a Bernie < insert suffix with intended derogatory meaning >! How the hell did Bernie get in this conversation?

The vitriol disturbed and confused me. I deleted my retweet because all the intensity must mean that I was missing something.

I later learned that Beto did break the No Fossil Fuel Money Pledge and was taken off the list because he received and did not return some large (and huge) donations from oil and gas executives. A detailed article about his oil and gas money was written by Sludge an organization that does deep analysis of campaign contributions.

O’Rourke broke the No Fossil Fuel Money Pledge—a commitment to reject campaign donations over $200 from fossil fuel PACs and executives that was endorsed by 16 environmental groups—which he signed. Sludge analysis

Then Sirota wrote an article that included information about Beto’s voting record. I clicked nearly every link. It was damn depressing. I tweeted my regret about not checking his voting record before supporting him. Again I was attacked and called names. Hey folks, there are trees in the forest if you care to stop and look.

Vicious attacks were being lobbied at Sirota. I have also been critical of him previously but this time I replied with a note of support. Wow! It felt like running through a cactus patch.

Not one person asked me if I looked anything up and obviously none of the attackers took the time to dig into the contributions or voting record as I had. I was attacked, called irresponsible and accused of uncritically retweeting and supporting Sirota.

Then GQ posted this short article:

No Democrat Deserves a Free Pass Just Because They’re Not Trump The completely manufactured “Bernie vs. Beto” fight is a reminder that there’s nothing wrong with demanding more from candidates.

All the pieces needed for a full on dumpster fire fell into place in three short steps.

First of all, it’s important to get the actual backstory out of the way. There’s no evidence that Sanders is directing or supporting, tacitly or otherwise, a shadow war against a Beto O’Rourke presidential run. That whole idea started because of a tweet from the director of the biggest liberal think tank in the country, the Center for American Progress, which has a spotty track record of actually supporting progressive goals or candidates. When journalist David Sirota shared O’Rourke’s record of accepting oil and gas donations, CAP director and Hillary crusader Neera Tanden took it to 11, calling on Bernie Sanders to repudiate such “attacks” by his “supporters.” GQ

Climate Change is the most important issue we face

I didn’t fall in with the Beto hero worship right away. I needed more information about his position on climate change and fossil fuels. I was suspicious because emails to his campaign went unanswered even though I know Zack Malitz. Tweets to the campaign also went unanswered. I finally became a monthly donor because, Ted Cruz.

Clicking the links in Sirota’s article proved my suspicions were warranted. My biggest issue with Beto is his oil and gas fracking friendly votes, statements, and policy.

He voted with Republicans on H.R. 702 – To adapt to changing crude oil market conditions.

Passed House amended (10/09/2015)
(Sec. 3) Amends the Energy Policy and Conservation Act to repeal authority to restrict the export of: (1) coal, petroleum products, natural gas, or petrochemical feedstocks; and (2) supplies of materials or equipment necessary to maintain or further exploration, production, refining, or transportation of energy supplies, or for the construction or maintenance of energy facilities within the United States.

Prohibits any federal official from imposing or enforcing any restriction on the export of crude oil.

Beto’s justification for voting to overturn the decades old crude oil ban sounds like something Ted Cruz would say.

Update because I forgot this part: Here is what the Obama White House said about it.

This vote helped fuel the fracking boom in the Permian Basin. U.S. refineries cannot refine the kind of crude produced in the Permian. Nearly every molecule of oil produced there is slated for export which will require a massive new oil and gas infrastructure build out that will keep us locked into fossil fuel use for decades.

In late 2015, Congress cut a deal to lift 40-year-old restrictions on the export of crude oil. That opened the floodgates. The U.S. sold 230 million more barrels of crude to other countries in the first half of this year than it did three years earlier — a surge made possible by a virtually identical spike in Permian production.

He also voted against Democrats on a bill that would have made it more difficult to drill in the Gulf of Mexico.

These are votes against the future of the young people he mesmerized with hope, against my own children’s future. These votes are unforgivable and should exclude him for consideration for any higher office.

I looked at his energy policy early on and didn’t find much which is why I contacted his campaign through email and twitter. Then I got caught up in the skateboarding, air drums, and hero worship. Now his policy is online for all to see.

Beto voted to repeal the Crude Oil Export Ban to support our economy and national security.

Beto has advocated for investing in the infrastructure to bring all of West Texas’s natural resources into market including wind, solar, natural gas, and oil.

He made pro oil and gas statements in the 2nd debate:

We can continue to grow this economy, we can reject the false choice between oil and gas and renewable energy, make sure that we produce, and refine, and transport, and use our energy resources more responsibly. And listen, this isn’t one political party saying this. This is people of both parties, in every single county in Texas that we’ve had the chance to listen to people, these are folks who work in the energy industry. Amy and I were in Iraan, Texas, listening those who work in some of these fracking operations. What they want is predictability and consistency in the regulations, and then they will perform to them.

Let me briefly deconstruct those statements.

There are more questionable votes.

Capital & Main reviewed the 167 votes O’Rourke has cast in the House in opposition to the majority of his own party during his six-year tenure in Congress. Many of those votes were not progressive dissents alongside other left-leaning lawmakers, but instead votes to help pass Republican-sponsored legislation.

He voted to weaken a key Wall Street regulation when he voted with Republicans for the Volcker Rule Regulation Harmonization Act.

…the Volcker Rule Regulation Harmonization Act, an innocuous name for a not-so-innocuous bill. The bill would weaken the Volcker Rule, which prohibits banks from making speculative investments with regular people’s money (with exceptions), by exempting banks with less than $10 billion in assets. And, for reasons beyond imagination, 78 Democrats voted for it. Source

He voted to allow President Obama to fast-track trade deal negotiations to grease the way for deals like the unpopular Trans-Pacific Partnership.

After a one-on-one phone call with Obama, the then-second term congressman from El Paso would be just one of 28 Democrats in the U.S. House to give the president what he wanted: fast track negotiating authority with other nations to finish trade deals. Source

Below are links to times he voted against his own party.  Some are shocking, some not so much. You can decide for yourself.

And here there are all in one place: Votes Against Party Majority by Beto O’Rourke (D-Texas)

Additionally, His rhetoric about health care is hard to pin down.

Beto is still better than Ted Cruz but that’s not good enough to be the president we need to solve our current problems.

I’ve saved the best for last. This Washington Post opinion, Why this progressive Texan can’t get excited about Beto O’Rourke By Elizabeth Bruenig, says it all. If you only read one thing here, read this. (It requires a subscription so I’ll post excerpts below.)

But I can’t get excited about O’Rourke, though I am from Texas and had hoped as much as anyone for Cruz’s defeat. I’m not sure we need another Obama, or another of any Democrat we’ve had recently: I think the times both call for and allow for a left-populist candidate with uncompromising progressive principles. I don’t see that in O’Rourke.

She praises his incredible campaign efforts. Then highlights some of the same concerns I shared above and more. She agrees that he is better than Trump, but that that’s not much of a goal. The last paragraph says it all.

But the primaries aren’t even here yet, so there’s no need to begin resigning ourselves to policies that are merely better than Republican alternatives. We still have time to pick a politician with a bold, clear, distinctly progressive agenda, and an articulated vision beyond something-better-than-this, the literal translation of hope-change campaigning. Beto is a lot like Obama, true; it’s perhaps time for left-leaning Democrats to realize that may not be a good thing.

As for me, my cards are always on the table: I wish the Democrats would run a left-populist with sincere, well-attested antipathy toward Wall Street, oil and gas, welfare reform and war, who is willing to fight hard to win Medicare-for-all and drastically reverse our current course on climate change. I would love it if they came from Texas, but I would take one from anywhere.

Do what you do with love and be damn fierce about it. Stick with it even when it gets prickly.