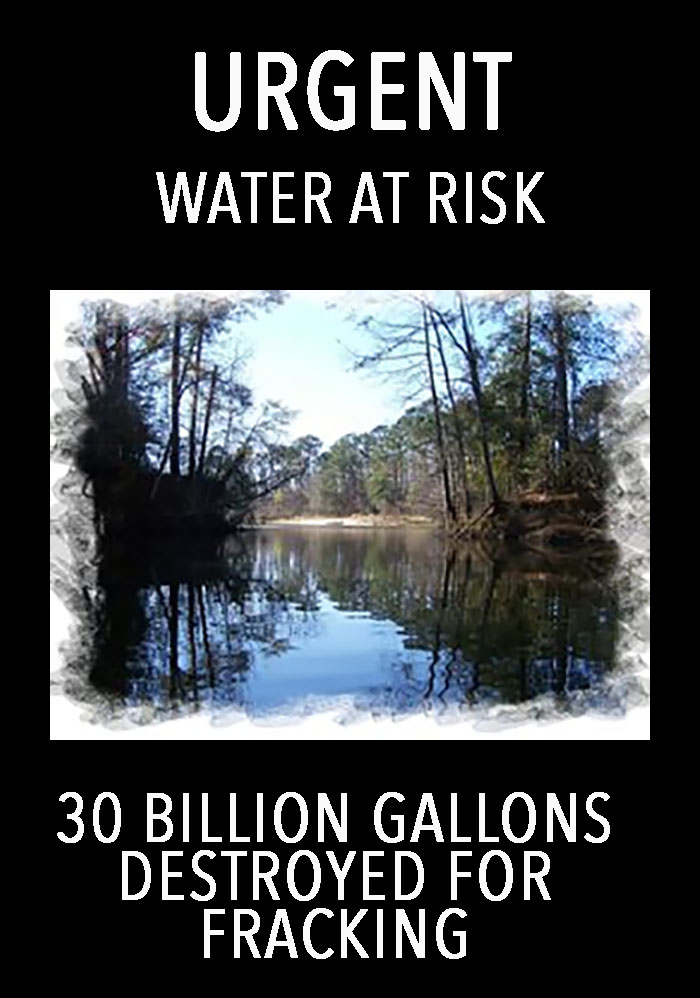 The fracking industry in Texas wants to take 30 BILLION GALLONS OF WATER from our rivers and treat it like trash that must be thrown away. Water doomed fracking trash will never be available for future generations. Do not let this happen!

When the water used for hydraulic fracturing returns to the surface as “flowback” it is contaminated with fracking chemicals and impurities from the formation. This toxic soup requires permanent disposal by injecting it into deep disposal wells “sealed above and below by unbroken, impermeable strata.” Dr. Paul F. Hudak of the geography department at the University of North Texas says:

“Disposing of used water through properly operated and maintained injection well systems, into deep rock formations, essentially removes that water from the active hydrologic cycle. Conceivably, this water could return to the active hydrologic cycle at some very distant point in the future (speaking in geologic terms, well beyond human time frames).

On January 11, the Angelina and Neches River Authority (ANRA) applied for a permit through the Texas Commission on Environmental Quality (TCEQ) to allow the oil and gas industry to pump over 3 billion gallons of water a year from the upper Angelina River Basin for the purpose of fracking.

If allowed, this permit will be good for the next 10 years.

The public has been given a narrow window- only until January 22- to comment on this. There are obviously many reasons to oppose this plan. Among a few:

In East Texas, there have been numerous earthquakes in the Timpson/Tenaha area– some over 4.0 in magnitude. one that registered as 4.8 magnitude and caused structural damage to homes and cracked a water well for the municipal water supply. There are several deep injection wells used in the disposal of fracking waste around this community- and this is an area that had no earthquakes before these wells were put into use. So one might well ask the TCEQ what is going to happen to the 3+ billion gallons of water each year drawn from the Angelina, after it becomes contaminated with fracking chemicals?

In December 2015, the agreement reached between governments at the Paris Climate Change Conference was that 75-80% of existent fossil fuels must remain untapped to avoid catastrophic overheating of our planet.

In what way does the permit, to allow the withdrawal of 3+ billion gallons of water annually from the Angelina River over the next ten years for additional fracking, help to advance this goal?

If you would like to read this notice of application, here is the link: