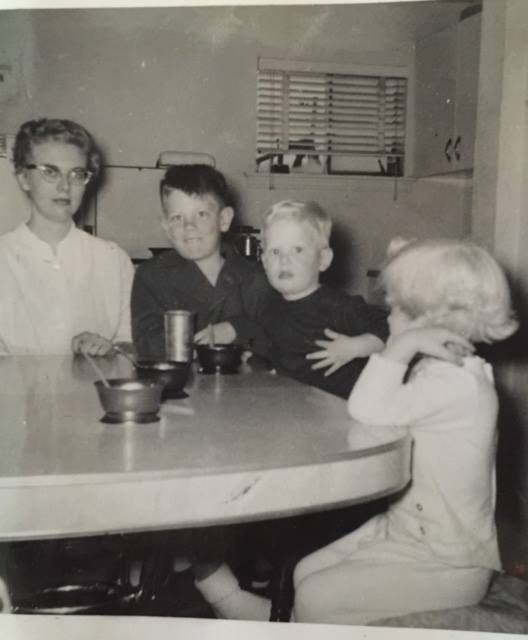 This post is about white privilege not fracking. But I believe the imbalances in our society all tie in together. One injustice supports another.

My father came home after being away for a while. My oldest brother sat on his left. My youngest on his right. I sat on his knee. He gave me a package of peanut butter crackers but something bad was happening so I didn’t open them. I looked down turning the package over and over. Whatever he was saying made me sad. I remember some yelling. My father put his fist through the wall by the front door just before he walked out. My mother cried and we patted her on the head. I was three years old.

I never saw my father again. My oldest brother started school soon after that scene and my mother got a job at General Dynamics. That’s a lot of change and loss for a three-year-old. It felt like everyone was leaving. I remember the doctor coming to our house with a sedative shot because, as some Texans might say: my cheese slipped off my cracker.

We moved to a two-story house that my grandparents owned. I was about four when Zeppy came to stay with us.

We loved Zeppy! She admired all the lizards, grass snakes and bugs we caught each day and let us keep them in the bathtub to show our mother. “That’s a fine looking lizard,” she would say. We were very poor but Zeppy made sure our hand-me-down clothes were clean and ironed. She plaited my blond hair. She kissed our boo-boos and told us stories.  I remember hanging out in the kitchen with her while she cooked delicious food. We felt safe with Zeppy.

One time my brother asked her why she didn’t wash her hands. He thought because her skin was brown, it meant her hands were dirty. I don’t remember the details of her reply but I do remember that it was calm and loving. I can’t remember what she looked like but I remember thinking she was beautiful.

The first time Zeppy took us “to town”—downtown Fort Worth—was the first time we rode a bus. We were excited because my mother had given her money so we could get hamburgers and shakes at the soda fountain on Main Street. A beautiful, tiny black woman with three perfectly dressed white children in tow stepped onto the bus and paid the fee. The driver said, “You white children can sit up here with me but your n*gger has to sit in the back.”

I still remember the fear and burning hot shame that washed over me. I did not know what his words meant but I knew they were bad. “No!” I screamed! “I want to sit with you Zeppy!” I cried while grabbing her skirt.

In the back of the bus sat three very blond, bewildered children with Zeppy and all the other black people who were kind to us. Someone shared Doublemint Gum and they fished Kleenex out of their purses to dry my tears.

When we got to the soda shop, Zeppy explained that we had to go to the back door because they didn’t let “Negros” come inside where white people were eating. “Why Zeppy? Why? What’s wrong?” we asked. We ate with Zeppy every day. Again, I remember the intense shame. It lingers still. I knew something very wrong was happening.

We took our hamburgers and shakes and headed to Burnett Park. Zeppy said, “We’re going to meet my people.”

Zeppy’s people were having a celebration called Juneteenth. They were happy to see us and made a big fuss about it. I remember they shared their food and gave us drinks. All the children played. I don’t remember feeling different. I felt safe and happy.

On the way home, I slept at the back of the bus, draped across Zeppy’s lap.

I have other memories where my white privilege slammed into me causing confusion, fear and shame. Anyone who was a child during the 50s has those memories. This memory is the most profound.

I haven’t said the pledge since my son pointed out when he was ten-years-old during the Iraq war that pledging allegiance to the flag of a country that lies to justify a war is undesirable. I don’t participate in the national anthem for the same reasons.

I hate football. But I agree with Colin Kaepernick.

“I am not going to stand up to show pride in a flag for a country that oppresses black people and people of color.”

I sat at the back of the bus with Zeppy and I’ll sit through the anthem with Colin. I hope the oppression will stop and the feelings of shame will end in my lifetime.