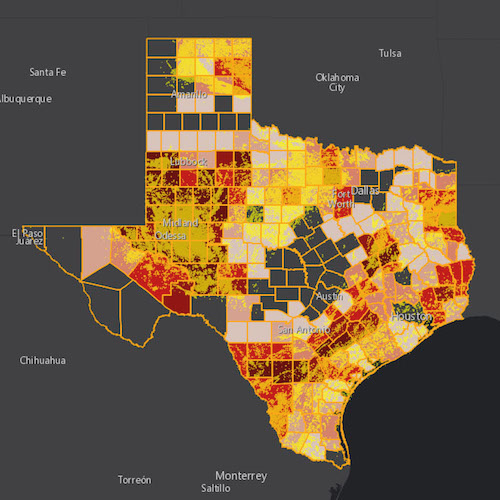 Today, Earthworks released Oil & Gas Threat Map (oilandgasthreatmap.com) a new tool that maps the locations of the 398,787 active oil & gas wells, compressors & processors operating in Texas, and the populations, schools and hospitals within a ½ mile radius of those facilities. Peer-reviewed science shows that living near polluting oil and gas operations is linked to negative health impacts, including fetal defects and respiratory ailments.

Based on peer-reviewed science and publicly-available data, the Oil & Gas Threat Map shows that within ½ mile of an active oil & gas facility:

The Oil & Gas Threat Map also allows anyone to search on their address to find if they live within the ½ mile threat radius.

“The oil and gas industry is recklessly polluting our air with millions of tons of methane and carcinogens like benzene that harm our health and speed up climate change,” said Sharon Wilson, North Texas Organizer for Earthworks. She continued, “It’s like an invisible oil spill happening every day, but our state government has vowed never to limit greenhouse gas pollution. We need the U.S. Environmental Protection Agency to require existing oil and gas operations to clean up their act.”

We’ve taken RRC well data and mapped every active well in TX, then

“The Oil and Gas Threat Map shows that 2.3 million Texans’ health are threatened by living within a half mile of an oil and gas operation, and I’m one of them,” said Debbie Ingram of Denton, Texas whose house lies within 600 feet of two gas wells. She continued, “I’m suffering from headaches, burning lungs, sore throats and nosebleeds. But when Denton voters tried to protect people like me, the state protected the oil and gas industry by passing HB40 to gut local control. Frankly, the U.S. Environmental Protection Agency is the only hope for Texans living with this pollution.”

Although scientific literature shows that health impacts are also associated at distances greater than ½ mile, the Oil and Gas Threat Map conservatively uses ½ mile because it is the distance at which these impacts have been most clearly correlated.

“Dirty drilling is no longer confined to rural Texas, but increasingly is encroaching on schools, hospitals and homes,” said Luke Metzger, Director of Environment Texas. “This map highlights the millions at risk from drilling pollution, especially the most vulnerable Texans. With the Legislature taking away the power of local communities to protect themselves from drilling, it’s more important than ever that the state take action to end the worst practices of drilling and better protect health and safety.”