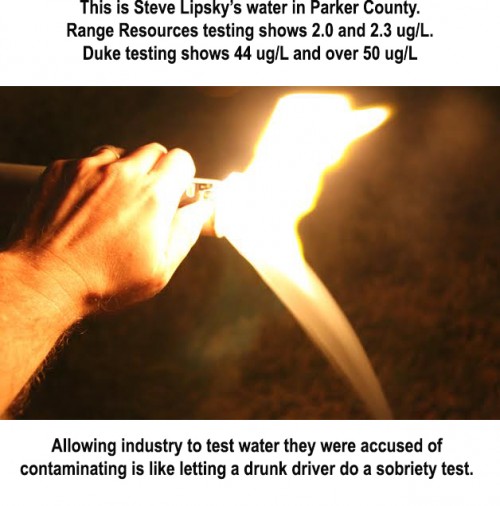 Any fair reading of this report leads to the conclusion that hydraulic fracturing pollutes drinking water.  And, despite EPA’s media efforts to suggest otherwise, the report also shows that pollution is both widespread and systemic.

My purpose is to address the problem of data gaps mentioned in the “charge” questions.

Industry obstruction, and aggressive use of non-disclosure agreements to gag impacted families and keep their proof of pollution hidden, both result in data gaps.

My comments today speak for some of those who cannot because of these NDAs.

During the initial scoping for this study, EPA solicited the public for locations to investigate.

Two Texas cases nominated included the Ruggiero property in Wise County and another in Argyle Bartonville .

1) Before drilling started on the Ruggiero’s property in Wise County, they obtained a baseline water test that showed their water was clean and safe. Six weeks after fracking, follow-up water testing found very high levels of MTBE, and BTEX chemicals. The lab said their water was unsafe to use.

The operator subsequently purchased the property and offered a settlement that required a non-disclosure agreement.

The rumor is the operator refused EPA access to the property for the purposes of this study.

The Argyle Bartonville area was also nominated for study.

2) Susan Sullivan’s water foamed like dishwater. Using her garden hose, she wrote HELP in foam, a YouTube video plea to the EPA. A lighter held to the water’s surface produced waxy plastic bits she could pick up.

The operator admitted using soap in their fracking solution for a well near her house. A letter to royalty owners explains why production at the well had fallen off: They used 300 barrels of water to flush the well and only recovered 10. The rest lost into the formation.

She is gagged under a non-disclosure agreement.

How many non-disclosure agreements exist or how much data they hide from the public is unknown.

This board should formally remark that a major source of data gaps results directly from industry obstruction, interference, and attempts to silence people who live with the pollution EPA intended to study.

In sum, the SAB should conclude that – in addition to water pollution – industry intimidation tactics are also widespread and systemic.  Thank you for accepting my comments.

Because I only had 3 minutes I had to cut the following:

The entire Hallowich family, even their small children, were gagged. A Pennsylvania judge partially opened those records which revealed results from water tests showing acetone and acrylonitrile, as well as toluene, ethyl benzene, tetra-chlorethylene and styrene in their well water.

It is impossible to track all the non-disclosure agreements so no one knows how much data is hidden from the public.

Recently, an attorney in Karnes County Texas called about his client’s water that lit on fire, showed high levels of hydrogen sulfide and killed a grown horse. He was seeking a settlement for his client and declined to reveal a name or speak with media.

Two landowners in Texas are suing operators. But suddenly found thermogenic methane in their water. One when the well blew up and badly burned the family.

I could continue. If the EPA wants to look, they will find widespread and systemic contamination of drinking water from fracking.