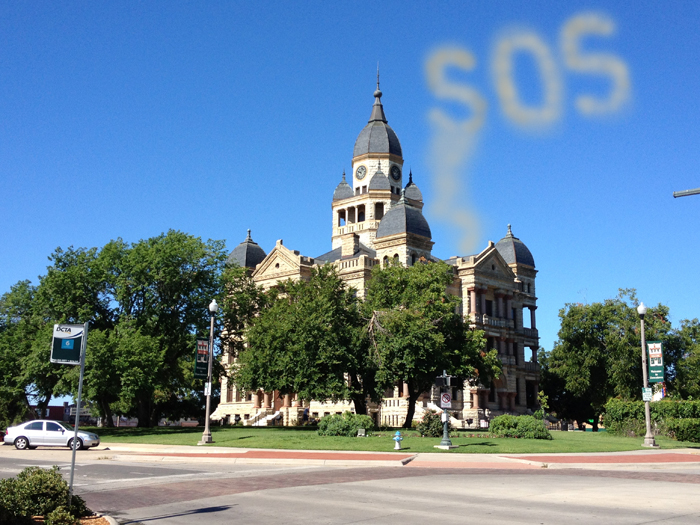 Over a month ago, I sent out the first SOS from Denton regarding the new power plan. We didn’t have much information at that time. Then we got a look at the Greenwashed Renewable Denton website and we still didn’t have much information but I put together what was available. I was labeled as a conspiracy theorist. Next we learned from a City Council agenda that a land purchase was on the agenda. They wanted to purchase nearly 167 acres for just one of the plants. Another SOS from Denton, and maybe this one is the one that brought me the conspiracy theorist label, I just can’t remember.

This month we will continue our series on the Renewable Denton plan. Discussion of this plan and exploration of alternatives is extremely important as we are considering long term high dollar commitments from the citizens and rate payers of Denton.

GUEST SPEAKER:
Tom “Smitty” Smith will discuss the economic and environmental advantages of a 100% renewable energy program in Denton.

The current “Renewable Denton” program proposed by Denton Municipal Electric includes the construction, at a cost of at least $225 million, of two auxiliary electricity generating plants using natural gas fueled engines to generate power. There are long-term concerns about the negative economic impacts and air pollution emissions of these facilities. Tom will address those concerns.

Tom is with Public Citizen and has been involved in Austin’s efforts to achieve 100% renewable energy sources.”

I’m going to ramble a bit and think out loud as I watch the Denton Council in their work session.

Natural gas prices will go up.

So shale is in decline and Denton wants to bet on shale with natural gas power plants. It seems like a good time to ask: How much fracking has to occur to feed the plants?

I am very lucky that I can ask super smart people questions and they will answer them. This question I asked of Cornell. After supplying some details about the kind of power plant, I got this back:

The recip. engines proposed are given a rating of 154.4 MMBtu/hr for each engine (so, 1852.8 for all 12 engines, HHV); assuming a dry gas heat rate of 1050 Btu/scf, the plant would require a feed of 1.76 MMscf/hr while operating at  100% capacity (40% capacity = 0.8 MMscf/hr). Summertime, the plant would more likely operate at full capacity, but rates will vary between the two values throughout the year.

All that translates into this:

According to Drllinginfo, the average Barnett shale gas well INITIALLY produces about 1.7MMscf/DAY, or about 0.07MMscf/hr.  That number declines to about 0.03MMscf/hr after 1 year of production.

Therefore, if the gas was coming only from NEW wells (not possible, not illustrative), it would require 1.76/.07 = 25 wells to feed the plant.  A year later, it would require about 58 wells.  The required number of wells continues to rise over time, as well production declines.

How much will these plants really cost?

Now this is really curious. Natural gas power plants have a very small footprint. Why does Denton need 167 acres for just one of the 2 plants under consideration? Here is an 800-megawatt plant on a 30-plus-acre site. I would like to know what DME has planned for all that land.

That’s enough for now. The Council just broke to eat dinner after Greg Johnson asked a question about the environment but it had a misleading lead up.