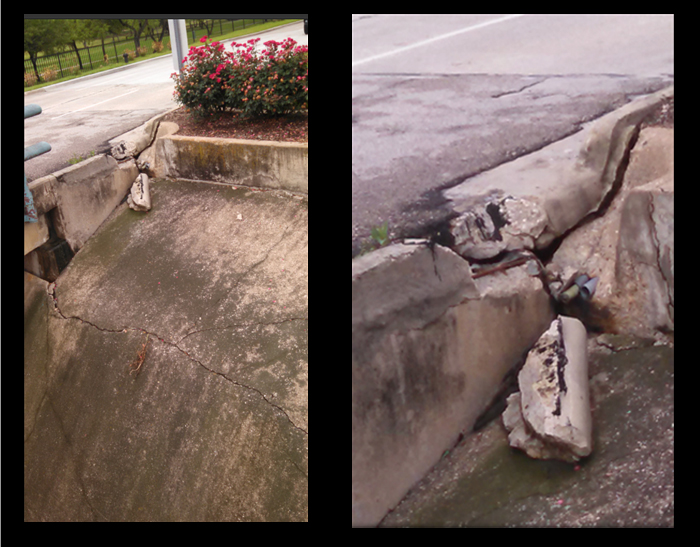 Bridge inspectors are checking recently built bridges for damage from earthquakes. The article says they haven’t found any damage but they might have missed this little bridge at the epicenter of the M3.1 frackquake that happened during the ladies golf tournament in Irving. 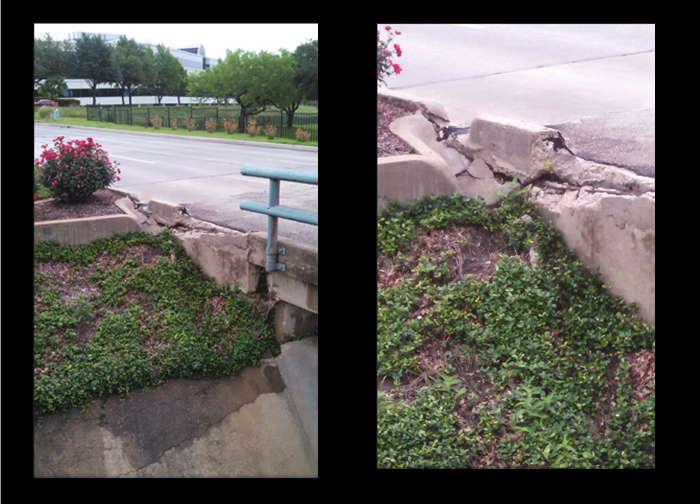 This past week the Railroad Commission ignored SMU’s peer-reviewed science and ruled that XTO’s injection well in Azle was not responsible for causing the earthquakes there.

SMU’s research found that XTO’s injection well was the “most likely” cause of the earthquakes.

At the Railroad Commission hearing, XTO’s lawyers and experts spent hours poking holes in the SMU research. SMU scientists elected not to participate in the hearing; no one showed up to defend their work. WFAA

There is an intense push by industry to export domestic, fracked oil and gas and this will only lead to more of the many fracking impacts including frackquakes. Here’s what they have planned for Texas. 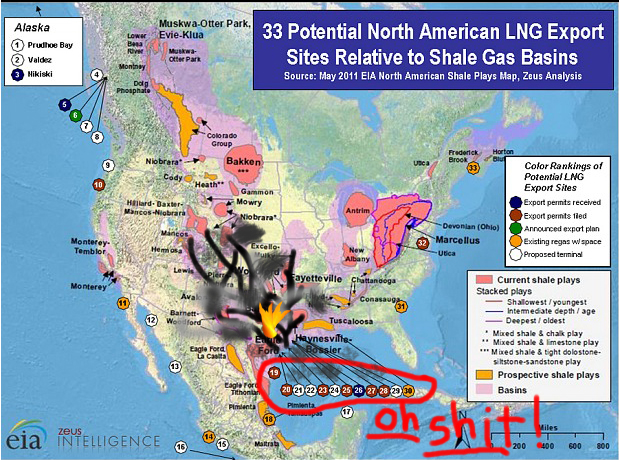 Exports will require more fracking. As depicted in the above map, the U.S. plans on 33 LNG export sites which will require an unthinkable increase in fracking.

B.C. is planning on 5 LNG export sites. The Oil and Gas Commission in B.C. has stated that LNG exports could cause “FIVE times as many fracking-caused earthquakes.”

In order to meet the province’s highest estimate of five terminals delivering 82 million tonnes of LNG a year, drilling would have to increase five-fold by 2020 — up to 2,100 wells per year, he said.

“If five terminals get built, get ready for some unavoidable seismic activity. I don’t think there’s any way you can stop it,” he said. “It’s just the cost of doing business.” The Star

The commission has, however, confirmed that Progress Energy triggered a 4.4 magnitude tremor last August — among the largest caused by the industry in Canada. The Star

SMU researchers say that Dallas should prepare for larger frackquakes.

“We do need to keep in mind there could be larger earthquakes and think about how we might prepare for that.”

Who profits? Who pays?

In the Netherlands, Royal Dutch Shell and Exxon Mobil “must compensate homeowners for declines in the value of their properties because of earthquakes linked to production at Europe’s largest gas field, the Groningen field.” These quakes are caused by extraction not fracking. Source

Earthquakes from extraction are quite common. SMU’s research found that “wastewater injection and saltwater extraction from natural gas wells is the most likely cause” of the quakes in Azle and Reno. Source  Researchers had similar findings about the earthquakes in the Eagle Ford Shale.

To shake things up a bit.

Calling @saeverley: #Fracking (by your cramped definition) definitively identified as cause of serious #earthquakehttp://t.co/I2pTBSp93Y