Texan communities statewide are planning how to restore local democratic control over fracking. They have to because the oil and gas industry, aided and abetted by the state legislature and Governor Abbott with the passage of HB40, stripped communities’ century old rights to govern oil and gas development concurrently with the state. 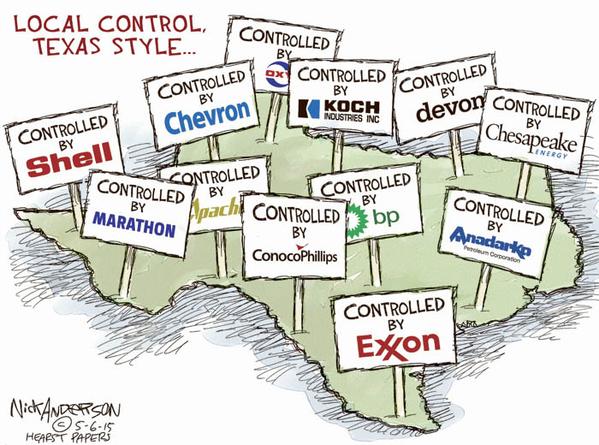 In the meantime, cities should consider using the “safe harbor” clause of HB40 to hoist frackers on their own petard.

Cities interested in updating their drilling ordinances should think about the HB40 safe harbor clause.

The industry, through our legislators, made it obvious that they desire a setback of 600’ or less. But there is at least one ordinance with a 1000’ setback that meets the HB40 safe harbor clause.

The Town of Dish has amended the ordinance several times to strengthen parts of it including noise and noxious odors. They added a vapor recovery unit requirement ordinance 5 years ago this past May.

There may be other five year old ordinances that have allowed drilling in the city limits with specific ordinances parts from which cities can pick and choose.

Adopting pieces of ordinances that comply with the HB40 safe harbor clause, puts cities in a good position to defend industry challenges against the new ordinance under HB40.

While 1000’ isn’t perfect, hell, it’s not even protective, it’s better than the 600’ feet embraced by industry.

The original ordinance with the 1000 ft setback  was adopted in 2006.  In 2008 or 2009 Devon drilled 3 wells in compliance with the ordinance, and the 1,000 ft setback.  There was another revision to the ordinance in 2008, but I can’t remember what the change was.  In 2010 we updated the ordinance requiring vapor recovery, but I don’t believe any drilling has taken place in the town limits since then.