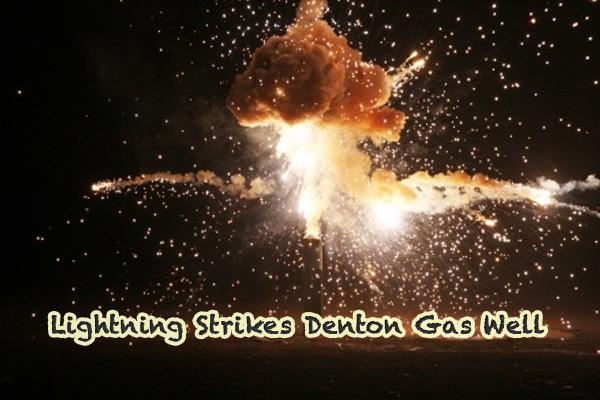 Three days after Drew Darby steamrolled HB 40 through the Texas Legislature, leaving cities with little control over oil and gas development, residents in North Texas experienced a lightning strike at one well and a M4.0 earthquake. There were also tornadoes last night so…fracknadoquake or maybe frackquakenado.

Lightning loves to strike oil and gas facilities. I have lots of blog posts about lightning striking wells.

The strike in Denton last night hit the wellhead at a Vantage Energy well. The Denton Fire Department has been dealing with the fire all night. Vantage said they would not have a crew on site for 7 hours. I guess they needed a good night’s sleep. So, raw gas from the wellhead is being flared and monitored by the fire department. I wonder if Vantage will reimburse the city.

Here is a press briefing filmed by a resident.

While Drew Darby and Myra Crownover were home asleep in their beds, the people in Denton were afraid their homes would burn and the people in Mansfield and Irving worried about frackquakes.

More in post last night. I’m sure the Denton Record Chronicle will have a story up soon. I will update as more information becomes available.

This appears to be the location of the Vantage well. It is likely that Vantage purchased this site with the intent to expand the pad and add more wells.

@TXsharon @yeungaileen @timesunion Thankfully, there were no injuries. Stop lying.

Building homes this close to gas wells is not smart. People need to be warned of the danger before buying homes close to oil & gas faciliies

“My husband and I jumped out of bed,” Bagheri said. “I saw flames dancing above the crown of our 40 year-old live oak tree.”

She estimated the wellhead to be about 1300 feet from her house. At that point, her sister had run to her home.

“I stepped outside to the strongest chemical, petroleum and tar smell I have ever smelled in my life,” Bagheri said.

Officials did not order an evacuation but people self-evacuated.