If you can’t go with us, meet us there! People are coming from all areas of Texas.

Local control is a Texan value

Get on the bus to Austin, tell the State to say no to “big government” 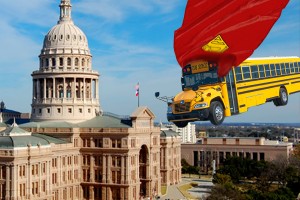 Many politicians in Austin got elected last November campaigning against “big government”.

Now elected, some of them want Texas to take away communities’ right to govern themselves.

That’s right, now that they are the government, these state legislators favor big government.

Last November, Denton residents voted — in a ballot initiative — to ban fracking within city limits after years of being ignored by the oil and gas industry, and the state.

Industry and the state aren’t ignoring communities any longer. Now they’re trying to squash them.

Oil and gas industry lackeys in Austin are now trying to strip communities power to determine what happens next to their homes, schools, hospitals, and playgrounds. And these efforts aren’t limited to fracking, they’d restrict the rights of local governments across Texas in a variety of ways.

Get on the bus!

Join your fellow North Texans as we travel from Denton to our state capital in Austin to tell our representatives to uphold our right to local control.

There are multiple bills already proposed in this legislative session that if passed, will strip municipalities of their home rule rights. Let’s go tell Austin we don’t want big government taking away local control!

Arrive in Austin at 11:30am: State Capital Building, Austin, TX

Return to Denton Wal-Mart by 8:30pm with drop-off at Fort Worth Wal-Mart.

En route, we will hear from someone with legislative experience on how to talk to our elected officials. You’ll be provided with materials to share with your representatives, and tools to help you feel confident telling your story.

We will have lunch in the Capital Grill where our lawmakers and their staff eat.

Face-to-face meetings with elected officials and their staff.

Return home – we cannot know the exact time but we will aim for no later than 8:30 p.m.

This will be a memorable, well-spent day! You will be able to say that YOU helped create the change you want to see!