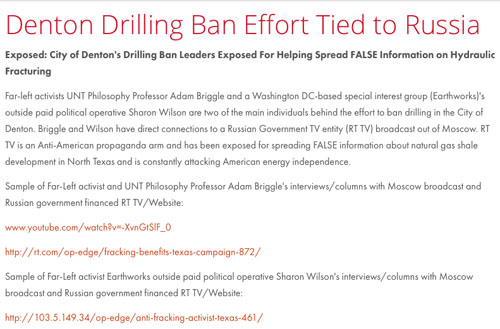 I was doing a little poll watching in Denton this morning. It was a fine, cool morning unlike the previous days where I felt like I was melting. And the “Responsible Drilling” hired guns where not there misleading voters so things were quite pleasant.

I saw a man wearing a “Responsible Drilling” t-shirt and recognized him immediately from this video in which he goes on and on listing various farm animals but doesn’t seem to know much about fracking other than that he makes money from it. The man was Randy Sorrells a board member for Denton Taxpayers for a Strong Economy, the group opposing the ban in Denton and the group that accuses me of having ties with Russia. 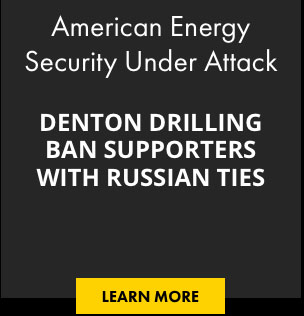 I decided to ask him about that. Here’s how the conversation went:

Me: Hey, I want to ask you a question. Why do you have on your website that I am affiliated with Russia?

Me: You don’t know why you accuse me of having ties to Russia? I don’t even know anybody from Russia.

Sorrells: All the studies I’ve read say that fracking is safe and my kids haven’t ever had one nosebleed.

Me: That is not what I’m asking you. I want to know why you say on your website that I am affiliated with Russia.

Sorrells: I don’t know. I didn’t put that up there.

Me: But it’s your website and you are a board member so you are responsible and I want it taken off.

Answer: I’ll look into it.

UPDATE: to further illustrate this point.

I asked the nice man handing these pigs out at the polls what “Responsible Drilling” means. He said it means protecting the aquatic live when drilling in the ocean. I asked him what is means in Denton (where there is no ocean). He said he was out of work and this is just a job. 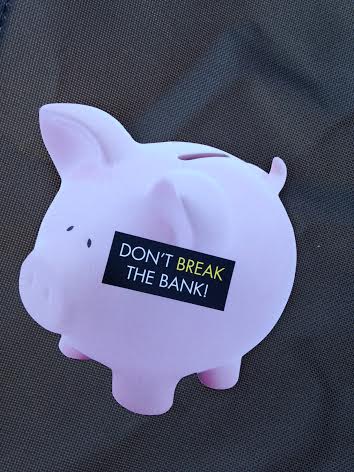 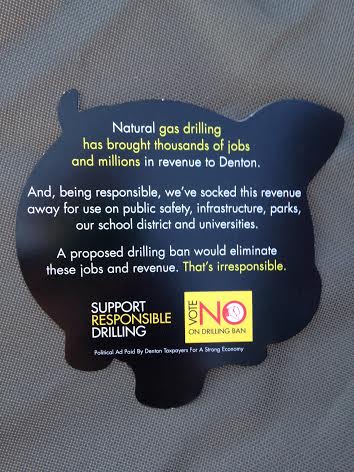 This journalistic service brought to you by me because no “real” journalist–that I know of–has asked this important question.

It’s irresponsible to lie to the residents of Denton.